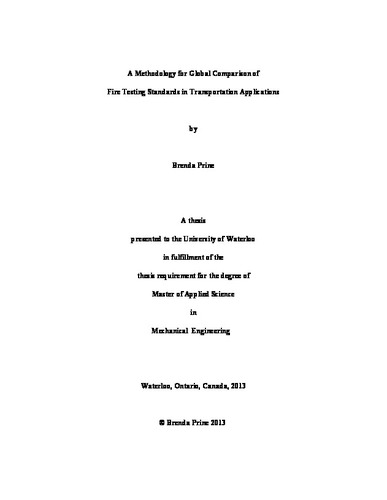 In recent decades, many manufacturing industries have globalized their operations and the Canadian manufacturing sector has experienced dramatic downsizing. For a manufacturing company to succeed therefore, it is necessary for them to operate with a global perspective. In the area of fire safety, this requires understanding of, and compliance with, global regulatory requirements. This research develops a systematic approach that can be utilized to analyze and compare the complex fire safety regulatory requirements that are stipulated for a selected topic in various countries. The approach developed is sufficiently general that it can be leveraged to compare and contrast global standards in any field or discipline. The methodology outlines six aspects of the regulatory environment that must be considered in sorting standards and then uses spreadsheets and a mind mapping program to elucidate the many relationships that exist amongst the current standards. In this work, flammability test requirements for public transportation seating are studied, with a major emphasis on seating for railway applications. Requirements for seating in aviation, automotive (both cars and buses) and military vehicles are included in the discussion for comparative purposes. Fire is a complex phenomenon that is difficult to characterize. The legislated testing protocols reflect this complexity with some geographic jurisdictions mandating as many as six different types of fire testing for rail seating. This work looks in depth at two of the main types of fire testing: flame spread testing and toxic effluent testing. Flame spread testing was chosen because it is widely required, and toxic effluent testing was chosen because of the many complexities and ambiguities present amongst these standards. Eleven flame-spread tests are compared on a semi-quantitative basis, and eight fire effluent toxicity tests are discussed on a qualitative basis. The technique developed was useful to elucidate the relationships, similarities and differences amongst the fire safety requirements for transportation seating. There are large differences in requirements among transportation sectors as well as on a geographical basis. Using this technique, it was possible to categorize the flame spread tests into two groups and to compare the relative intensity of the tests within each of these subsets. The fire effluent toxicity tests varied so much in approach that only qualitative comparisons were possible.