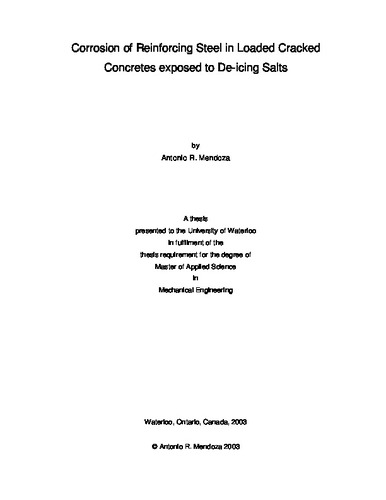 The corrosion of the reinforcing steel in concrete by de-icing salts is one of the major issues concerning the durability of reinforced concrete. Different methods have been used to protect the reinforcing steel, but still corrosion of reinforced structures continues to be a big problem causing enormous costs in their restoration and rehabilitation. The continuity of the pores of concrete plays a crucial role in the corrosion of the reinforcing steel. The ingress of corrosive species, such as chloride ions, oxygen and water, through the pores of the concrete cover cause the breakdown of the passive layer formed on the steel by the high pH of the concrete. The use of supplementary cementitious materials (SCM) in the production of high performance concrete (HPC) improves its resistance to corrosive species as a result of the pozzolanic reaction which forms more calcium silicate hydrates (C-S-H). Most of the studies about the corrosion of the reinforcement in HPC have been carried out in sound concrete. However, very few works have been reported on the corrosion of steel in cracked concrete. The crack pattern on HPC is very distinct from that formed on ordinary portland cement (OPC) concrete, which may result in different corrosion mechanisms of the reinforcing steel. The objective of the present work consisted in the evaluation of the corrosion of reinforcing steel in cracked HPC and OPC concrete under different exposure and loading conditions. For that purpose, two sets of beams of HPC (containing fly ash or slag) and two sets of OPC concrete were cast. The difference between the OPC concretes was the date of casting. Three sets of reinforcing steel probes were embedded in each beam at different locations. All the beams were cracked at midspan by the four-point method. Eight beams of each concrete were coupled in pairs and partially immersed in a solution of de-icing salts every two weeks. In this way, one set of the corrosion probes was non-submerged (top) while the other two were completely submerged (one at the crack level and the other at the bottom). Two pairs of beams were subjected to static loading whereas the other two were under cyclic loading. The corrosion potentials readings were taken daily by a data acquisition system, whereas the corrosion rates were determined by the Linear Polarization technique using a corrosion monitoring system. According to the results obtained, the corrosion rates of the submerged and non-submerged probes are very low. This behaviour is observed for the four concretes and for both loading conditions. The type of loading did not influence the corrosion rates of these probes, which were in the same range for all the concretes. On the other hand, the probes close to the crack showed higher corrosion rates, especially those under cyclic loading. In general, the OPC concrete cast during the winter presented the highest corrosion rates for both loading conditions, followed by the OPC concrete cast in the summer (as were both HPCs), then by HPC-Slag and HPC-Fly Ash, which showed the lowest values. In most of the cases there was a good agreement between the corrosion potentials and the corrosion rates, so that the OPC concretes exhibited the most negative values. The lower corrosion of the probes in the HPC-Fly Ash and HPC-Slag beams was ascribed to the continued pozzolanic activity, which may result in the self-healing of the crack with time. The probes close to the crack in the dynamically loaded beams experienced higher corrosion than those in the static beams. In some cases the corrosion rate reached values above 100 mm/year. The lower corrosion of the probes in the static beams was attributed to the self-healing of the crack. The formation of additional microcracks in the dynamic beams during cyclic loading may be responsible for their higher corrosion. The corrosion potential of the rebar cage shifted to more negative values during cyclic and static loading. This change in the potential was associated with stress concentration of the reinforcement surface, making it more active. Although the shift in the potential was not really significant, this may have important consequences in practice where the concrete is subjected to higher loads.