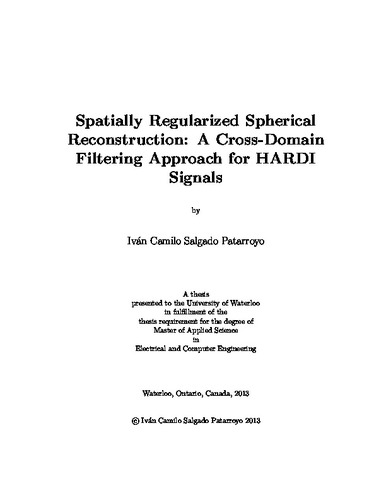 Despite the immense advances of science and medicine in recent years, several aspects regarding the physiology and the anatomy of the human brain are yet to be discovered and understood. A particularly challenging area in the study of human brain anatomy is that of brain connectivity, which describes the intricate means by which different regions of the brain interact with each other. The study of brain connectivity is deeply dependent on understanding the organization of white matter. The latter is predominantly comprised of bundles of myelinated axons, which serve as connecting pathways between approximately 10¹¹ neurons in the brain. Consequently, the delineation of fine anatomical details of white matter represents a highly challenging objective, and it is still an active area of research in the fields of neuroimaging and neuroscience, in general. Recent advances in medical imaging have resulted in a quantum leap in our understanding of brain anatomy and functionality. In particular, the advent of diffusion magnetic resonance imaging (dMRI) has provided researchers with a non-invasive means to infer information about the connectivity of the human brain. In a nutshell, dMRI is a set of imaging tools which aim at quantifying the process of water diffusion within the human brain to delineate the complex structural configurations of the white matter. Among the existing tools of dMRI high angular resolution diffusion imaging (HARDI) offers a desirable trade-off between its reconstruction accuracy and practical feasibility. In particular, HARDI excels in its ability to delineate complex directional patterns of the neural pathways throughout the brain, while remaining feasible for many clinical applications. Unfortunately, HARDI presents a fundamental trade-off between its ability to discriminate crossings of neural fiber tracts (i.e., its angular resolution) and the signal-to-noise ratio (SNR) of its associated images. Consequently, given that the angular resolution is of fundamental importance in the context of dMRI reconstruction, there is a need for effective algorithms for de-noising HARDI data. In this regard, the most effective de-noising approaches have been observed to be those which exploit both the angular and the spatial-domain regularity of HARDI signals. Accordingly, in this thesis, we propose a formulation of the problem of reconstruction of HARDI signals which incorporates regularization assumptions on both their angular and their spatial domains, while leading to a particularly simple numerical implementation. Experimental evidence suggests that the resulting cross-domain regularization procedure outperforms many other state of the art HARDI de-noising methods. Moreover, the proposed implementation of the algorithm supersedes the original reconstruction problem by a sequence of efficient filters which can be executed in parallel, suggesting its computational advantages over alternative implementations.