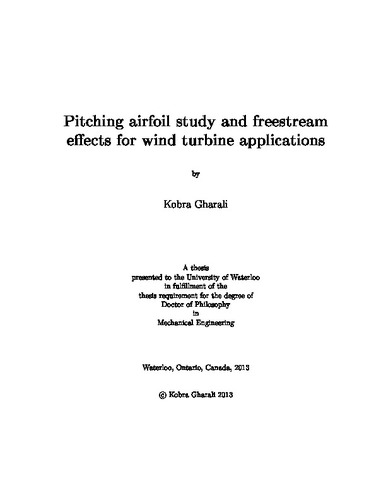 A Horizontal Axis Wind Turbine (HAWT) experiences imbalanced loads when it operates under yaw loads. For each blade element of the aerodynamically imbalanced rotor, not only is the angle of attack unsteady, but also the corresponding incident velocity, a fact usually unfairly ignored. For the unsteady angle of attack, a pitch oscillating airfoil has been studied experimentally and numerically when 3.5×10⁴<Re<10⁵. For small wind tunnel airfoils, Particle Image Velocimetry (PIV) was utilized to determine the aerodynamic loads and the pressure field where other measurement techniques are either intrusive or very challenging. For dynamic airfoils in highly separated flow fields, i.e., deep dynamic stall phenomena, loads were calculated successfully based on the control-volume approach by exploring ways to reduce the level of uncertainties in particular for drag estimation. Consecutive high resolution PIV velocity fields revealed that increasing the reduced frequency was followed by an enriched vortex growth time and phase delay as well as a reduced number of vortices during upstroke motion. Moreover, the locations of the vortices after separation were influenced by each other. Laminar separation bubble height also showed a reducing trend as the reduced frequency increased. The nature of the vortex sheet vortices before stall were explored in two Reynolds numbers, with and without laminar separation bubbles, at low angles of attack. For all cases, a vortex sheet was the result of random vortex sheding while a longer vortex sheet was more favorable for lift augmentation. A wake study and averaged drag calculation at low angles of attack were also performed with Laser Doppler Anemometry (LDA) for Re=10⁵. For the unsteady incident velocity, longitudinal freestream oscillations have been studied numerically, since experimental study of an unsteady freestream is challenging. In this regard, the streamwise freestream velocity and pitch angle of incidence oscillated with the same frequency in a wide range of phase differences. Changing the phase difference caused variation of the results, including significantly augmented and dramatically damped dynamic stall loads, both increasing and decreasing trends for vortex growth time during phase increase and shifted location of the maximum loads. The results showed strong dependency on the velocity and acceleration of the freestream during dynamic stall and the dynamic stall characteristics differed significantly from those of the steady freestream states. The results also demonstrated consistent trends regardless of the airfoil shape and the Reynolds number while Re=10⁵ and 10⁶. The vortex study presented here not only provides information about the unsteady aerodynamic forces, but also knowledge regarding airfoil noise generation and distributed flow for downstream objects beyond wind turbine applications.