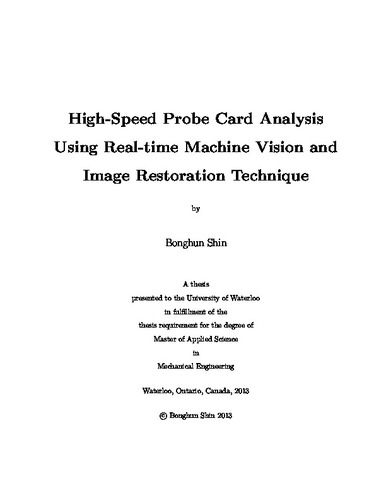 There has been an increase in demand for the wafer-level test techniques that evaluates the functionality and performance of the wafer chips before packaging them, since the trend of integrated circuits are getting more sophisticated and smaller in size. Throughout the wafer-level test, the semiconductor manufacturers are able to avoid the unnecessary packing cost and to provide early feedback on the overall status of the chip fabrication process. A probe card is a module of wafer-level tester, and can detect the defects of the chip by evaluating the electric characteristics of the integrated circuits(IC's). A probe card analyzer is popularly utilized to detect such a potential probe card failure which leads to increase in the unnecessary manufacture expense in the packing process. In this paper, a new probe card analysis strategy has been proposed. The main idea in conducting probe card analysis is to operate the vision-based inspection on-the- y while the camera is continuously moving. In doing so, the position measurement from the encoder is rstly synchronized with the image data that is captured by a controlled trigger signal under the real-time setting. Because capturing images from a moving camera creates blurring in the image, a simple deblurring technique has been employed to restore the original still images from blurred ones. The main ideas are demonstrated using an experimental test bed and a commercial probe card. The experimental test bed has been designed that comprises a micro machine vision system and a real-time controller, the con guration of the low cost experimental test bed is proposed. Compared to the existing stop-and-go approach, the proposed technique can substantially enhance the inspection speed without additional cost for major hardware change.