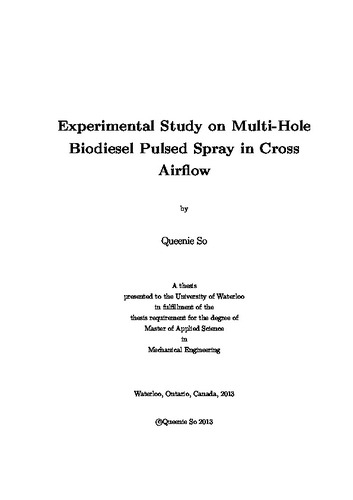 Many fuel spray characterization studies to date have been conducted in quiescent environments with single-hole fuel injectors. However, in actuality, multi-hole injectors spray into direct injection engine cylinders where significant air swirling and tumbling exist to promote fuel atomization and air-fuel mixing, which result in more efficient combustion. For this reason, researchers have begun developing correlations for fuel sprays where a jet of air acts perpendicularly to the fuel spray, also known as a cross airflow or crossflow, so as to more realistically predict fuel spray characteristics in direct injection engines. Accordingly, there is a need for a foundation of experimental data reflecting the specific conditions of fuel spray in cross airflow which can then be used for model validation and future engine design and development. In this study, fuel sprays are characterized with a commercial 8-hole fuel injector in a wind tunnel enclosure capable of cross airflows upwards of 200m/s. Particle image velocimetry was used to measure air velocities and capture pulsed spray events of biodiesel, diesel, and biodiesel-diesel blend fuels. Spray images were processed and analyzed in LaVision's DaVis and in MATLAB to calculate spray penetration length and axis deflection angle under varying cross airflow velocities, fuel injection pressures, and fuel types. Results show that strong cross airflows can decrease spray penetration by up to 44% and deflect the spray axis by up to 10.5° when compared to the same spray in a quiescent environment. Additional experiments reveal that biodiesel experiences slower spray progression when compared with diesel, resulting in shorter spray penetrations in the early phase of the spray development (up to 0.7ms after the start of injection, or ASOI). The angle between the fuel injector axis and the air jet axis plays an important role in determining the resultant spray characteristics. This angle should be considered in future correlations.