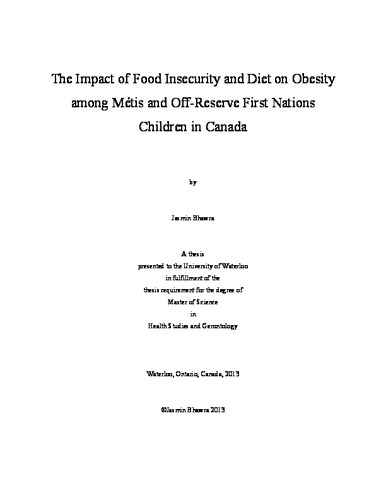 Objective: Aboriginal children are disproportionately affected by obesity, as they are twice as likely to be classified as obese compared to their non-Aboriginal Canadian counterparts. Research indicates that income, food insecurity, and diet quality are important predictors of weight status, however these factors are not well explored among Aboriginal children living off reserve. This study aims to identify associations between food insecurity and diet on obesity status among off-reserve First Nations and Métis children. Methods: This study used both quantitative and qualitative research methods. Data from the 2006 Aboriginal Peoples Survey (APS) – Children and Youth component were analyzed using binary logistic regression and the proportional odds model to assess relationships between food insecurity, diet, and body mass index (BMI). Fruit and vegetable intake, as well as junk food consumption, were used as proxy measures for children’s diet quality. Additional analyses involving income instead of food insecurity, as well as food insecurity interaction terms, were also explored. Focus groups were conducted with caregivers of Métis and off-reserve First Nations children in Midland-Penetanguishene and London, Ontario, respectively. The focus groups were planned and carried out in partnership with the Métis Nation of Ontario (MNO) and the Southwest Ontario Aboriginal Health Access Centre (SOAHAC). A thematic analysis was conducted with the qualitative data, and the focus group discussions provided important contextual information to complement the statistical results. Results: Approximately 11% of First Nations and 6.8% of Métis children were food insecure according to the 2006 APS. The quantitative analysis did not find a significant association between food insecurity and diet, or food insecurity and BMI for First Nations or Métis children. Income was a better predictor of weight status than food insecurity. For First Nations children, having a household income higher than $60,000 decreased the risk of being overweight/obese. For Métis children, a household income of less than $20,000 increased the risk of overweight/obesity. Food insecurity was only significant as an interaction with parental education for First Nations children, and with parental education and number of people living in the household for Métis children. The proportional odds model produced similar results to the binary logistic regression procedure, and food insecurity remained insignificant in the analyses. Contrary to the quantitative findings, the focus group discussions indicated that caregivers perceived a positive relationship between low income and food insecurity, as well as adverse impacts on their children’s diets. While caregivers did not use the term “food insecurity” explicitly, conversations about not having enough food or money for food, as well as coping strategies for when these situations occurred, suggested that food insecurity manifests itself in different ways. Caregivers mentioned decreased variety of foods, compromised fruit and vegetable intake, as well as decreased traditional food consumption as examples of how families’ food consumption and purchasing patterns changed when food insecure. Food insecurity negatively impacted children’s diets, and many caregivers attributed the rise in overweight and obesity to poor diet quality. Some of the key barriers to children eating healthfully were unaffordability and limited access to healthy foods. Caregivers also discussed the role of various programs for improving child health within their communities. Conclusions: While food insecurity was not significantly associated with obesity in the quantitative analyses, discussions with caregivers of First Nations and Métis children identified food insecurity and low income as important predictors of poor diet, and consequently decreased well-being. Several limitations associated with the 2006 APS design may have prevented food insecurity from being significantly associated with obesity risk; however, it is clear from both the quantitative and qualitative components of this study that income consistently affects diet and child obesity risk. Findings from this study can inform necessary improvements to existing programs, interventions, and policies targeting obesity and health of Aboriginal children.

Jasmin Bhawra (2013). The Impact of Food Insecurity and Diet on Obesity among Métis and Off-Reserve First Nations Children in Canada. UWSpace. http://hdl.handle.net/10012/7765