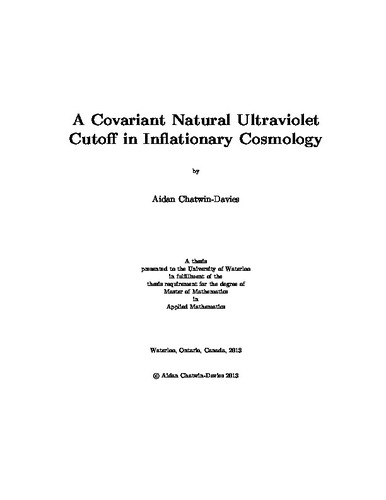 In the field of quantum gravity, it is widely expected that some form of a minimum length scale, or ultraviolet cutoff, exists in nature. Recently, a new natural ultraviolet cutoff that is fully covariant was proposed. In the literature, most studies of ultraviolet cutoffs are concerned with Lorentz-violating ultraviolet cutoffs. The difficulty in making a minimum length cutoff covariant is rooted in the fact that any given length scale can be further Lorentz contracted. It was shown that this problem is avoided by the proposed covariant cutoff by allowing field modes with arbitrarily small wavelengths to still exist, albeit with exceedingly small, covariantly-determined bandwidths. In other words, the degrees of freedom of sub-Planckian modes in time are highly suppressed. The effects of this covariant ultraviolet cutoff on the kinematics of a scalar quantum field are well understood. There is much to learn, however, about the effects on a field’s dynamics. These effects are of great interest, as their presence may have direct observational consequences in cosmology. As such, this covariant ultraviolet cutoff offers the tantalizing prospect of experimental access to physics at the Planck scale. In cosmology, the energy scales that are probed by measurements of cosmic microwave background (CMB) statistics are the closest that we can get to the Planck scale. In particular, the statistics of the CMB encodes information about the quantum fluctuations of the scalar inflaton field. A measure of the strength of a field’s quantum fluctuations is in turn given by the magnitude of the field’s Feynman propagator. To this end, in this thesis I study how this covariant ultraviolet cutoff modifies the Feynman propagator of a scalar quantum field. In this work, I first calculate the cutoff Feynman propagator for a scalar field in flat spacetime, and then I address the cutoff Feynman propagator of a scalar field in curved spacetime. My studies culminate with an explicit calculation for the case of a power-law Friedmann-Lemaître-Robertson-Walker (FLRW) spacetime. This last calculation is cosmologically significant, as power-law FLRW spacetime is a prototypical and realistic model for early-universe inflation. In preparation for studying the covariant cutoff on curved spacetime, I will review the necessary back- ground material as well as the kinematic influence of the covariant cutoff. I will also discuss several side results that I have obtained on scalar quantum field theories in spacetimes which possess a finite start time.