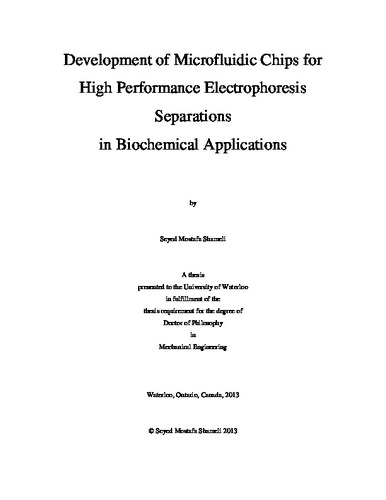 Electrophoresis separation corresponds to the motion and separation of dispersed particles under the influence of a constant electric field. In molecular biology, electrophoresis separation plays a major role in identifying, quantifying and studying different biological samples such as proteins, peptides, RNA acids, and DNA. In electrophoresis separation, different characteristics of particles, such as charge to mass ratio, size, and pI, can be used to separate and isolate those particles. For very complex samples, two or more characteristics can be combined to form a multi-dimensional electrophoresis separation system, significantly improving separation efficiency. Much effort has been devoted in recent years to performing electrophoresis separations in microfluidic format. Employing microfluidic technology for this purpose provides several benefits, such as improved transport control, reduced sample volumes, simplicity of operation, portability, greater accessibility, and reduced cost. The aim of this study is to develop microfluidic systems for high-performance separation of biochemical samples using electrophoresis methods. The first part of the thesis concerns the development of a fully integrated microfluidic chip for isoelectric focusing separation of proteins with whole-channel imaging detection. All the challenges posed in fabricating and integrating the chip were addressed. The chip was tested by performing protein and pI marker separations, and the separation results obtained from the chip were compared with those obtained from commercial cartridges. Side-by-side comparison of the results validated the developed chip and fabrication techniques. The research also focuses on improving the peak capacity and separation resolution of two counter-flow gradient electrofocusing methods: Temperature Gradient Focusing (TGF) and Micellar Affinity Gradient Focusing (MAGF). In these techniques, a temperature gradient across a microchannel or capillary is used to separate analytes. With an appropriate buffer, the temperature gradient creates a gradient in the electrophoretic velocity (TGF) or affinity (MAGF) of analytes and, if combined with a bulk counter-flow, ionic species concentrate at unique points where their total velocity is zero, and separate from each other. A bilinear temperature gradient is used along the separation channel to improve both peak capacity and separation resolution simultaneously. The temperature profile along the channel consists of a very sharp gradient used to pre-concentrate the sample, followed by a shallow gradient that increases separation resolution. A simple numerical model was applied to predict the improvement in resolution when using a bilinear gradient. A hybrid PDMS/glass chip integrated with planar micro-heaters for generating bilinear temperature gradients was fabricated using conventional sputtering and soft lithography techniques. A specialized design was developed for the heaters to achieve the desired bilinear profiles using both analytical and numerical modeling. To confirm the temperature profile along the channel, a two-color thermometry technique was also developed for measuring the temperature inside the chip. Separation performance was characterized by separating several different dyes, amino acids and peptides. Experiments showed a dramatic improvement in peak capacity and resolution of both techniques over the standard linear temperature gradients. Next, an analytical model was developed to investigate the effect of bilinear gradients in counter-flow gradient electrofocusing methods. The model provides a general equation for calculating the resolution for different gradients, diffusion coefficients and bulk flow scan rates. The results indicate that a bilinear gradient provides up to 100% improvement in separation resolution over the linear case. Additionally, for some scanning rates, an optimum bilinear gradient can be found that maximizes separation resolution. Numerical modeling was also developed to validate some of the results. The final part of the thesis describes the development of a two-dimensional separation system for protein separation, combining temperature gradient focusing (TGF) and sodium dodecyl sulfate (SDS) polyacrylamide gel electrophoresis (PAGE) in a PDMS/glass microfluidic chip. An experimental study was performed on separating a mixture of proteins using two characteristics: charge to mass ratio, and size. Experimental results showed a dramatic improvement in peak capacity over each of the one-dimensional separation techniques.