Sampling-Window Based Approach for Fire Gas Analysis of Rigid Foams 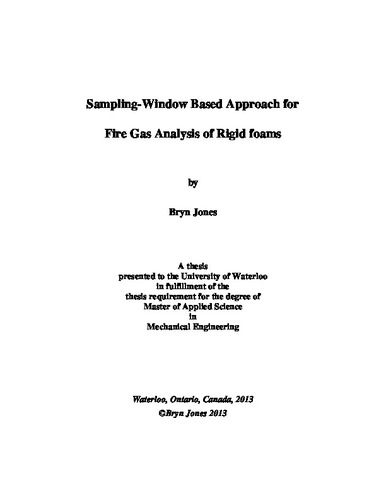 A sampling-window based approach was developed to collect and analyze the gases evolved during fire performance testing using the cone calorimeter. For this purpose, a Fourier Transform Intra-red (FTIR) Spectroscopy system and a Novatec analyzer were coupled to the cone calorimeter. An experimental gas sampling apparatus was designed and constructed and a sampling-window based method was developed. The sampling-window based method was initially tested using blue Styrofoam samples, then a small number of intumescent materials were also examined. Using the new integrated system, spectral scans were taken with an FTIR using 30s, 45s and 60s sampling windows, during off-gasing, fire growth, steady heat release rate, and fire decay stages of cone calorimeter testing. By focusing the sampling window on a specific stage of fire development the tests indicated that high concentrations of toxic gases were evolved during sample off-gasing, before ignition. In contrast to other methods that are designed to obtain total toxic gas yield over the full course of a cone calorimeter fire performance test, the sampling-window method here allows for a greater understanding of fire gas evolution at the various stages of fire growth and development. With the cone calorimeter coupled with a preconfigured “out of the box” lightweight portable ambient air analyzer and the sampling-window based approach developed, the fire gases associated with the polystyrene (blue Styrofoam) could be identified along with a number of the fire gases typically associated with the intumescent foam. For further analysis of fire gases produced, a calibrated, lab quality FTIR, with a higher resolution than the preconfigured “out of the box” lightweight portable ambient air analyzer may be required. However the system configuration and methodology would remain the same as developed here. The sampling-window based approach developed is useful for use in the development of other gas sampling techniques and can be used with other complimentary techniques such as Gas Chromatography (GC) and Mass Spectroscopy (MS). In such a combined Cone Calorimeter-GC-MS system, the GC is used to separate the various fire gases while the MS is used to identify all the components at a molecular level, and provide a more concise analysis of evolved fire gases. It is therefore recommended that the GC-MS technique also be developed for the cone calorimeter and used to compliment the FTIR technique developed in this study.