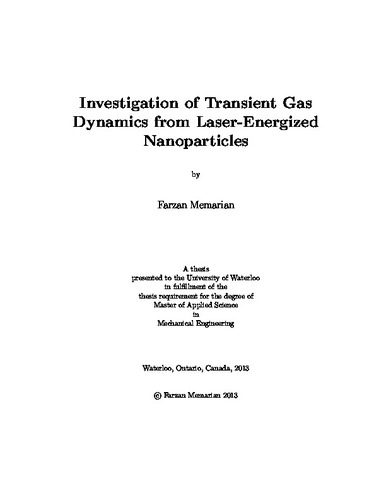 Soot is formed whenever the combustion of hydrocarbon fuels is incomplete. Since soot particles are very small, they can be inhaled and cause severe health problems, such as pulmonary diseases. They can also cause environmental pollution, and have a significant effect on global warming and melting of polar ice sheets. The environmental and health impact of soot depends strongly on soot particle size and morphology, so there is a pressing need for measuring techniques that characterize aerosolized soot. Laser-Induced incandescence (LII) has proved to be a reliable technique for making spatial and temporal measurements of soot primary particle sizes and soot volume fractions. Nevertheless, there are some unresolved issues in LII, which may cause large errors in soot primary particle size inferred from LII data. One of these issues is anomalous cooling, which is the unexpectedly high initial rate of soot particle cooling observed in experiments, which can not be predicted by LII models. Among the speculations about the possible causes of this phenomenon is the transient gas dynamics effects which have been ignored in LII models. Another phenomena that has been speculated to affect LII predictions in high fluence LII, is how the gas dynamics of sublimed carbon clusters impact the local gas dynamics surrounding the particle during the cooling phase. The focus of this thesis is to investigate transient effects on heat conduction in low fluence LII, and the gas dynamics of sublimed species in high fluence LII using Direct Simulation Monte Carlo (DSMC) method. DSMC is a statistical/numerical method which works based on the physics of Boltzmann equation. In this method a large number of real molecules are represented by the so called simulated molecules and the state of these molecules is tracked during the simulation as they undergo collisions with each other and with the boundaries. The results show that transient effects contribute to anomalous cooling but are not the only cause of this phenomenon. The time scale over which transient effects are significant is also found to be very close to that of anomalous cooling which implies the real cause of anomalous cooling has some similarities to transient effects. Also regarding gas dynamics of sublimation, two effects in particular have been investigated using DSMC, namely, back flux of sublimed species and formation of shock waves. DSMC results confirm the back flux of sublimed species but no shock wave was observed for the boundary conditions considered in this study.