“Where do you get that extra 20 minutes a day?”: Understanding how local-level environmental factors shape the implementation of Ontario’s Daily Physical Activity Policy 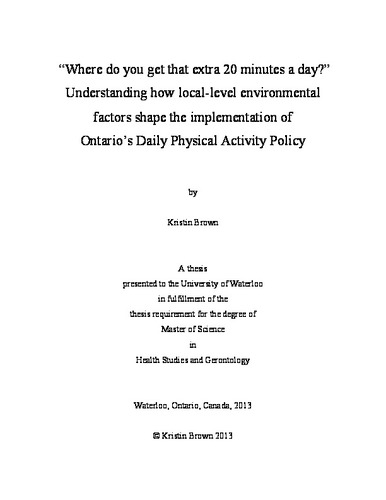 Rising obesity rates and low physical activity levels among children and youth are a global concern due to links to adverse health outcomes, poor quality of life, and an increased burden on the health care system. One response to the problem has been the implementation of school-based physical activity and nutrition policies. For example, the Ontario Ministry of Education’s Daily Physical Activity (DPA) Policy mandates that all elementary school students receive at least 20 minutes of physical activity per day. This exploratory research sought to understand the local-level factors shaping implementation of DPA, from the perspective of elementary school teachers and principals. Qualitative in-depth interviews were conducted with Ontario grade 1-8 teachers (n=14) and elementary school principals (n=5) regarding DPA implementation, facilitators, barriers, perceived outcomes, and suggestions for change. Interviews were audio recorded (with permission) and transcribed verbatim for subsequent thematic analysis using NVivo. Although all but two participants indicated they had implemented DPA, the majority reported that students were not meeting the requirement daily. Findings were organized using the Analysis Grid for Environments Linked to Obesity (ANGELO) framework. Implementation facilitators were focused within the microenvironment (i.e., classrooms and schools), while barriers were identified within both the micro- and macroenvironments (i.e., classrooms, schools, school boards, and the Ministry of Education). Both teachers and principals considered DPA a lower priority than other subjects, partly because of limited monitoring of implementation within schools and school boards. Participants discussed student benefits resulting from DPA; however, student fitness was not identified as a positive outcome- in fact, some questioned whether the policy is improving student physical activity levels. The results suggest the status of DPA results from a failure of implementation rather than a failure of concept. Participants believed increasing student physical activity levels was important; however, they argued that factors within the classroom, school, school board, and Ministry of Education limit the feasibility of delivering DPA. This thesis contributes to the limited literature regarding the evaluation of DPA implementation and outcomes by exploring the perspectives of teachers and principals implementing the policy. Substantive, methodological, and theoretical contributions to the school-based physical activity literature are discussed, followed by policy implications and directions for future research.

Kristin Brown (2013). “Where do you get that extra 20 minutes a day?”: Understanding how local-level environmental factors shape the implementation of Ontario’s Daily Physical Activity Policy. UWSpace. http://hdl.handle.net/10012/7716