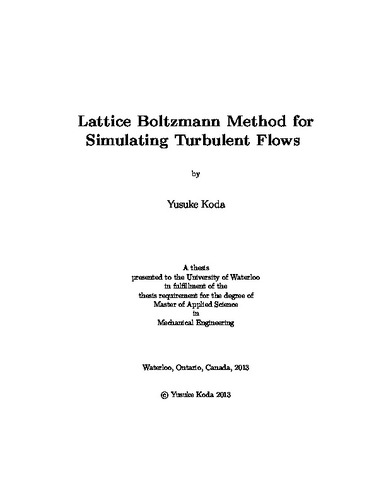 The lattice Boltzmann method (LBM) is a relatively new method for fluid flow simulations, and is recently gaining popularity due to its simple algorithm and parallel scalability. Although the method has been successfully applied to a wide range of flow physics, its capabilities in simulating turbulent flow is still under-validated. Hence, in this project, a 3D LBM program was developed to investigate the validity of the LBM for turbulent flow simulations through large eddy simulations (LES). In achieving this goal, the 3D LBM code was first applied to compute the laminar flow over two tandem cylinders. After validating against literature data, the program was used to study the aerodynamic effects of the early 3D flow structures by comparing between 2D and 3D simulations. It was found that the span-wise instabilities have a profound impact on the lift and drag forces, as well as on the vortex shedding frequency. The LBM code was then modified to allow for a massively parallel execution using graphics processing units (GPU). The GPU enabled program was used to study a benchmark test case involving the flow over a square cylinder in a square channel, to validate its accuracy, as well as measure its performance gains compared to a typical serial implementation. The flow results showed good agreement with literature, and speedups of over 150 times were observed when two GPUs were used in parallel. Turbulent flow simulations were then conducted using LES with the Smagorinsky subgrid model. The methodology was first validated by computing the fully developed turbulent channel flow, and comparing the results against direct numerical simulation results. The results were in good agreement despite the relatively coarse grid. The code was then used to simulate the turbulent flow over a square cylinder confined in a channel. In order to emulate a realistic inflow at the channel inlet, an auxiliary simulation consisting of a fully developed turbulent channel flow was run in conjunction, and its velocity profile was used to enforce the inlet boundary condition for the cylinder flow simulation. Comparison of the results with experimental and numerical results revealed that the presence of the turbulent flow structures at the inlet can significantly influence the resulting flow field around the cylinder.