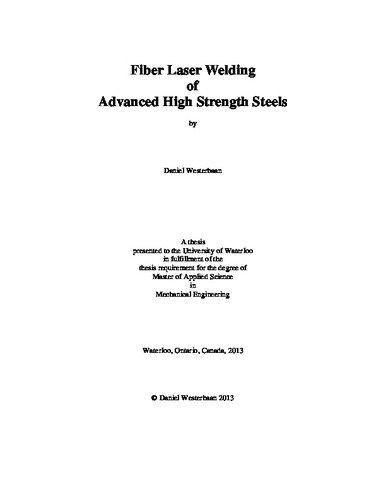 Fiber laser welding (FLW) was used to join advanced high strength steel (AHSS) and high strength steel (HSS); specifically two dual-phase (DP) steels, with ultimate tensile strengths above 980 MPa and with different chemistries (DP980 Rich and DP980 Lean), and a high strength low alloy (HSLA) steel, with an ultimate tensile strength of 450MPa (HSLA450). The welding speed and power were varied to develop a process envelope for minimizing weld concavity. In order to attain welds free of weld concavity a balance of speed and power was required; weld concavity could be reduced by lowering power and increasing speed. Welds with amounts of concavity ranging from 15 % to 35 % were characterized with respect to hardness, tensile and fatigue testing. Tensile results revealed that DP steel was sensitive to weld concavity while HSLA450 was not. At stress amplitudes enduring beyond 1000 cycles, welded specimens exhibited lower fatigue resistance compared to the base metal. Concavity reduced the fatigue life of DP980 steels, where increasing the amount of concavity further reduced the fatigue resistance, while the fatigue resistance of HSLA steel welds was not sensitive to weld concavity. Hardness profiling of the welds revealed that HAZ softening was present in the DP980 steel welds. The amount of HAZ softening was normalized; allowing for comparison of different steels. Welds made by FLW demonstrated reduced softening compared other laser welding types because FLW was capable of welding with lower heat input. A difference in the FZ hardness was observed between the DP980 steels because of the difference in carbon content of the steels; where higher carbon content resulted in higher FZ hardness. Additionally the high cooling rate in FLW created higher fusion zone hardness than the values predicted by Yurioka’s model based on arc welding. Examination of the microstructure revealed that the soft zone of DP980 Lean steel possessed severely tempered martensite and untransformed ferrite while DP980 Rich generated a structure with a mixture of tempered martensite, untransformed ferrite and a small fraction of non-tempered martensite. This difference in HAZ softening was attributed to the alloying content of the DP980 Rich steel the higher alloying content of DP980 Rich steel formed a stable austenite that could exist near the Ac1 temperature and enabled the formation of new martensite in the soft zone. The effects of HAZ softening were apparent in tensile testing where the DP980 Lean steel, which exhibited higher softening, demonstrated by a severe reduction in elongation while the DP980 Rich steel, which had higher resistance to softening, attained elongation comparable to its base metal. HSLA450 exhibited a slight reduction in elongation due to the hardening of the fusion zone. The welded DP980 Rich and HSLA450 steels consistently failed within the base metal, while the DP980 Lean steel failed in the soft zone. The welded DP980 Rich steel also demonstrated limiting dome heights comparable to the base metal while the severe softening in the DP980 Lean led to premature fracture in the soft zone, yielding a larger reduction in the limiting dome height.