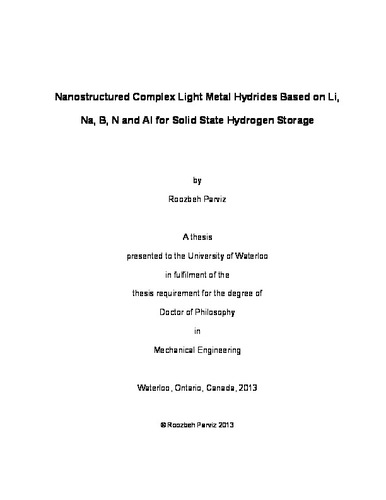 The present work reports a study of the effects of the compositions, and various catalytic additives and nanostructuring by high-energy ball milling, on the hydrogen storage properties of LiBH4, NaBH4, LiNH2 and LiAlH4 complex hydrides and their composites. The composites of (NaBH4+2Mg(OH)2) and (LiBH4+2Mg(OH)2) without and with nanometric nickel (n-Ni) added as a potential catalyst were synthesized by ball milling. The effect of the addition of 5 wt.% nanometric Ni on the dehydrogenation behavior of both the NaBH4-and LiBH4-based composites is rather negligible. In the (LiNH2+nMgH2) system, the phase transformations occurring as a function of the ball milling energy injected into the hydride system (LiNH2+nMgH2), having molar ratios n=0.5 to 2.0, have been thoroughly studied. The milling energy is estimated by a semi-empirical method. The results show that for the molar ratios n<1.0 three new phases such as LiH, amorphous Mg(NH2)2 (a-Mg(NH2)2) and Li2Mg(NH)2 are formed during ball milling depending on the injected energy. For the molar ratios n≥1.0 the new phase of MgNH forms whose formation is accompanied by a profound release of hydrogen. Addition of 5 %wt. KH can improve desorption rate of the LiNH2+0.5 MgH2 system. Furthermore this hydride system can be nearly fully rehydrogenated at 200°C and 50 bar H2 pressure. LiAlH4 containing 5 wt.% of nanometric Fe and Ni shows a profound mechanical dehydrogenation by continuously desorbing hydrogen (H2) during ball milling. X-ray diffraction studies show that Fe and Ni ions dissolve in the lattice, replacing the Al ions and forming a substitutional solid solution. Both Fe and Ni decrease the activation energies of stage I and II , but stage I is more sensitive to the particle size . The addition of 5 wt.% nano-size “interstitial compound” (n-TiC, n-TiN and n-ZrC) shows a continuous desorption of H2 is observed during high energy milling. Mechanical dehydrogenation rate of the doped samples increases noticeably during high-energy ball milling in the order of TiN > TiC > ZrC. The interstitial compound additives are able to strongly reduce the activation energy of Stage II dehydrogenation but do not substantially affect the apparent activation energy of Stage I .