What are the Effects of Maternal Obesity on Synaptic Function in the Maternal and Offspring Hippocampus? 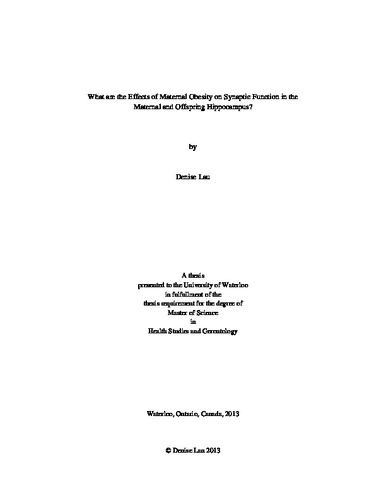 Obesity is a global epidemic that is associated with several adverse health consequences. In addition, there is also a growing prevalence of obesity in pregnancy. Maternal obesity places the fetus in an abnormal in utero condition that can produce alterations in development leading to permanent programming of physiological systems. Obesity is also associated with cognitive dysfunction, which calls for investigations into its effects on the hippocampus, a brain area involved in learning and memory. Long-term potentiation (LTP), a neurophysiological correlate for learning and memory, can be examined in hippocampal slices. This study aimed to fill in the gap in literature regarding the effect of obesity on hippocampal synaptic plasticity in female rats, and maternal obesity effects on offspring hippocampal synaptic plasticity. Female Sprague-Dawley rats were fed either a control diet (CD), or a high-fat diet (HFD; 40% of calories from saturated fat) for 16 weeks. Impaired glucose tolerance and greater retroperitoneal fat pad weight indicated an obese phenotype in HFD rats; as well, the modified diet led to impaired LTP: CD rats had 10% more potentiation in amplitude, and 11% more potentiation in slope than HFD rats. Offspring were weaned onto control diet at post-natal day 21. Reduced success rates for achieving LTP, and lowered magnitudes of mean LTP in the offspring, strongly suggest that maternal obesity may have compromised hippocampal synaptic plasticity, and warrants further study.

Denise Lau (2013). What are the Effects of Maternal Obesity on Synaptic Function in the Maternal and Offspring Hippocampus?. UWSpace. http://hdl.handle.net/10012/7635