A Diet High in Saturated Fat Leads to Obesity in Female Rats, but Does Not Affect Total, Synaptic, or Cell Surface Expression of NMDA Receptor Subunits In Hippocampus 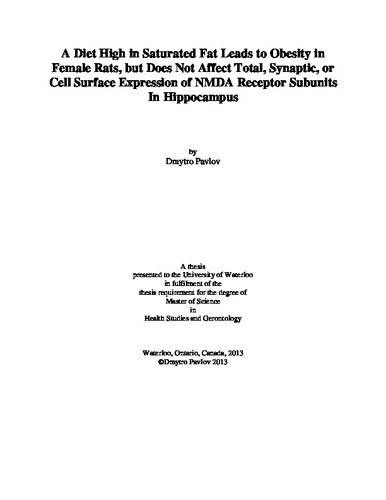 Obesity is an accumulation of adipose tissue to the point of negative health outcomes; the association of obesity with type 2 diabetes and cardiovascular disease is particularly profound. Notably, obesity has begun to be associated with impairments in cognitive function; however, the underlying cellular mechanisms are poorly understood. Behavioural studies have demonstrated a link between a high fat diet and impaired hippocampal function, and our aim was to characterize protein level changes in the hippocampus of an obese female rat model. Female rats were fed either a control diet (CD; 10% kcal from fat), or a high-fat diet (HFD; 45% kcal from fat) for 16 weeks. Body weight, food consumption, fasting blood glucose levels, and glucose tolerance were monitored. Upon sacrifice brain, liver, adrenal glands, spleens and fat pads were harvested and analyzed. Plasma leptin and insulin levels were also measured. The distribution of NMDA receptor subunits was examined by using either cell-surface biotinylation, or differential filtration-centrifugation followed by immunoblotting. The feeding protocol induced an obese phenotype in female rats characterized by larger fat pads, spleens and adrenal glands, as well as greater problems handling a glucose load. However, cellular, surface and synaptic expression of NMDA receptor subunits (GluN1, GluN2A & GluN2B) were not significantly altered, which suggests that changes downstream of the receptor may be responsible for the effects of HFD on cognitive behaviour.

Dmytro Pavlov (2013). A Diet High in Saturated Fat Leads to Obesity in Female Rats, but Does Not Affect Total, Synaptic, or Cell Surface Expression of NMDA Receptor Subunits In Hippocampus. UWSpace. http://hdl.handle.net/10012/7632