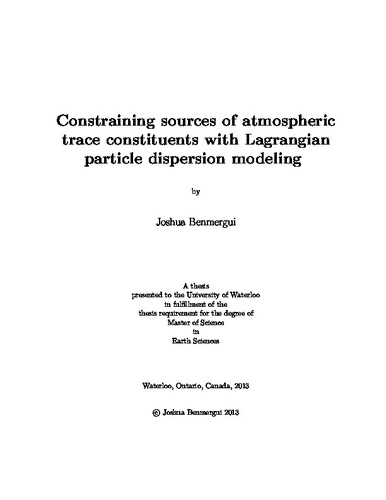 This manuscript based thesis examines and advances methods for constraining sources of atmospheric trace constituents with a Lagrangian particle dispersion model. The method of Bayesian inversion is demonstrated, and a new method is introduced to a class of similar problems where established methods are not applicable. First, A new regression based methodology was developed and applied to observations of atmospheric methanesulfonic acid mass concentrations at Alert, Nunavut. The methodology was used to compare the importance of phytoplankton blooms vs. the ice-free ocean as sources of the dimethylsulfide precursor, and to compare the importance of bromine monoxide vs. hydroxyl as agents oxidizing dimethylsul de to methanesulfonic acid. These issues are relevant to the application of methanesulfonic acid concentrations in ice cores to determine historic sea ice properties. The analysis indicated that source regions to Alert during the spring are primarily ice-free ocean with a significant contribution from ice edge blooms, and during the summer to be dominated by the ice-free ocean. The model also indicated that oxidation of DMS by BrO was the dominant source of MSA in the spring, while DMS oxidation by OH was the dominant source in the summer. Secondly, Bayesian inversion was applied to observations of atmospheric elemental carbon mass concentrations at Tsinghua University in Beijing, China. The analysis provided evidence that current bottom-up elemental carbon emissions estimates in northern China are likely underpredicted. Global chemical transport models show ubiquitous underestimates of the atmospheric burden of elemental carbon, especially near large sources of emissions. Northern China is among the regions with the most intensive elemental carbon emissions in the world, and an underestimate of emissions in this region may be partially responsible for the global chemical transport model underestimates.