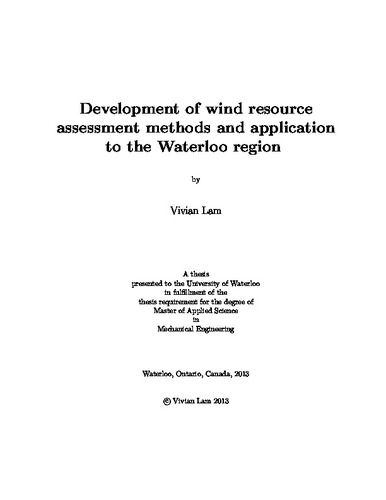 A wind resource assessment of two sites in the Waterloo region, WRESTRC and RIM Park, was conducted using wind speed, wind direction, temperature and pressure data collected from meteorological towers for over two years. The study was undertaken as part of the W3 Wind Energy Project, and the equipment was purchased from NRG Systems and R. M. Young Company. The data was filtered to reduce the effect of icing and tower shadow, and was analyzed using MATLAB software. Based on the mean wind speeds, small wind turbines less than 50 kW in capacity would be appropriate at both sites. Wind speeds tended to be stronger during the winter than the summer, and during the afternoon than the rest of the day. Both sites also exhibited a strong dominant wind direction -- from the northwest. Due to the terrain, the wind shear and turbulence intensity at WRESTRC were moderate when the wind flowed from the dominant direction, but very high from other directions. The wind shear and turbulence intensity at RIM Park were consistently moderate in all directions. Although the terrain seems more complex at WRESTRC, the wind speed distribution and estimated annual energy production were higher at WRESTRC than at RIM Park, which indicates that it is a more viable site. The estimated capacity factors ranged from 9.4% to 22% depending on the hub height, which is not nearly high enough to suggest a commercial wind farm would be viable at either site. A small 5 kW to 15 kW wind turbine in the Waterloo region could offset the electricity usage of an average home. A two-parameter power law model of wind shear was explored and compared with the standard one-parameter model. In terms of goodness-of-fit, the two-parameter model did perform better. But in terms of accuracy of extrapolation, it was not conclusively better or worse than a one-parameter model forced through the known data point closest to the prediction height. The relationship between turbulence intensity and measurement interval was examined. Since atmospheric flow is unsteady, they are not independent. The perceived turbulence intensity was found to increase exponentially with time intervals under 24 hours. Two linear regression-based Measure-Correlate-Predict methods were evaluated using long-term data from a weather station also at WRESTRC. The ordinary least squares method was considered the baseline given its simplicity. The variance ratio method improved upon it by ensuring that the variance of the wind speed distribution at the target site was preserved.