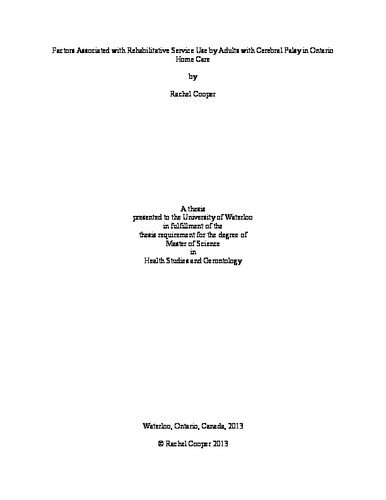 Cerebral Palsy (CP) is a childhood-onset neurological disorder caused by a non-progressive lesion in the developing brain. It causes permanent motor and movement disorders, and can sometimes cause secondary cognitive, sensory, and communication conditions. The majority of children with CP will survive into adulthood; however, a relatively small amount of research has been done about adulthood and aging with CP. Using data collected in Ontario with the Resident Assessment Instrument for Home Care (RAI-HC), a retrospective, cross-sectional analysis was performed to create a clinical profile of adults with CP receiving long term home care services in Ontario. Of the 519, 443 people in the sample, 2000 had CP. Persons with CP tended to be younger than comparison groups, had higher scores on functional assessment scales, and were more likely to use assistive devices. They tended to have lower scores on scales meant to predict decline in health or function than the comparison groups, suggesting increased health and functionality stability compared to other Home Care recipients. A second analysis assessed the association between functional assessment scales, demographic variables and clinical indicators and use of physical therapy (PT), occupational therapy (PT) and either PT or OT for persons with CP in this population. Using three logistic regression models, indicators that were found to have positive, significant associations with use of rehabilitative services were: receipt of initial assessment, likelihood of decline in functionality, use of a wheelchair, being married, and CCAC of assessment origin. Living in a private residence compared to living in an assisted living situation had a significant, negative effect on rehabilitative service use. These findings suggest that PT and OT are referred to persons with CP in reaction to risk of health declines, and not in an attempt to improve baseline functionality. Future research on the factors that would indicate likelihood of improvement with PT or OT could identify whether these associations are appropriate for optimum care for persons with CP who receive home care services.