Driving Cessation and Relocation to Retirement Villages: A Preliminary Examination of Associations between these Transitions and their Influence on Travel Patterns and Community Engagement 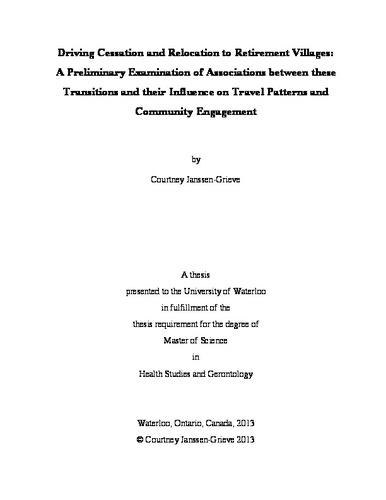 Introduction: Mobility is critical for independence, social engagement and quality of life, which for many seniors equates with driving. Driving cessation has been associated with depression, isolation and decreased social and community engagement. However, apart from a few studies in the United States, research on the impacts of driving cessation and transportation use in general has been restricted to community dwelling seniors. It is estimated that 40,000 seniors in Ontario alone currently live in retirement facilities; a number expected to increase. Purposes: The aim of the wider project is to gain a better understanding of the transportation patterns and needs of older adults living in retirement homes. The specific aims of this study, which focused on residents who recently stopped driving (in the past two years), were to examine: 1) events leading to driving cessation, impacts (including depression), and possible associations with relocation; 2) transportation use, including how frequently they left the Village; and 3) connections with family and friends, and activity engagement in and outside the Villages. Methods: A survey of residents from four retirement Villages in Southern Ontario was conducted to examine driving status and use of other modes of transportation. An in-depth study was then conducted with a sample of 20 residents (9 men and 11 women, age 86.45 ± 5.16), recruited via letters, pamphlets, booths and door-to-door. The study involved both quantitative (questionnaires, scales on depression and balance confidence, activity checklists) and qualitative methods (small group discussions). Participants were also asked to complete travel diaries over two weeks for all trips outside the Village (purpose and mode of travel). Results: The transportation survey (N=407; 56% response rate) showed that 68% of residents had stopped driving (N=273), over half within 12 months of relocation. In the in-depth study, 36.8% had stopped driving before the move (average of 3.43±1.72 months, range 1 to 6), 42.1% after the move (average of 27.38±13.51 months, range 2 to 46), and 21.2% within the same month. While the quantitative data indicates a relationship between these transitions, this connection was often not made by residents themselves. Several mentioned health problems as the main reason they quit driving; two had lost their licenses. Regardless, most felt the decision to quit driving was voluntary and done at the “right time”. Except for a few people, this sample did not have depression symptoms and had adjusted to no longer driving. The majority (85%) had relatives in the area and most stayed connected to relatives and friends living outside the Village through visits and phone calls. Nearly all the residents (90%, n=18) received rides from others, most commonly from their daughters (70%), followed by friends outside the Village (60%). Half the sample said they used public buses occasionally, and those who did had significantly higher balance confidence scores on the ABC scale (73.33±18.50) compared to those who did not (49.44±21.02) (t=-2.69 p=0.015). Confidence scores, however, did not differ for those who used the Village shuttle (80%) and those who did not (20%). Based on their travel diaries, 76.5% of the residents (13/17) made at least one trip outside the Village over a two week period (average of 7.00±4.93, range 1 to 18), most often as a passenger in a private vehicle (58%). Recreation and social trips were the most common (44.2%), followed by: medical appointments (18%), shopping (17%), errands (15.3%) and religious activities (5.4%). The sample also took advantage of services and amenities inside the Village, including: meals in the dining room (95%), the café (90%), general store (80%), salon (65%), library (65%), laundry facilities as well as services of health professionals. They also participated in Village programs, including: music, concerts, movies (80%), physical activities (65%), games (55%) and religious services (50%). Conclusions: Seniors who can afford to live in upscale retirement homes may not suffer the adverse effects of driving cessation often found in community seniors. Despite advanced age and mobility restrictions (85% used a walker outdoors), these individuals remained connected to the outside community. This sample, at least, took advantage of the services and amenities in their Villages which may reduce their need for travel outside the Village. They do not appear to have unmet transportation needs, given that most had relatives in the area as well as other people to drive them when needed. More studies are needed on this growing segment of the senior population, particularly on other types of retirement facilities which may not offer as many services (such as shuttle buses or vans) for residents.

Courtney Janssen-Grieve (2013). Driving Cessation and Relocation to Retirement Villages: A Preliminary Examination of Associations between these Transitions and their Influence on Travel Patterns and Community Engagement. UWSpace. http://hdl.handle.net/10012/7592