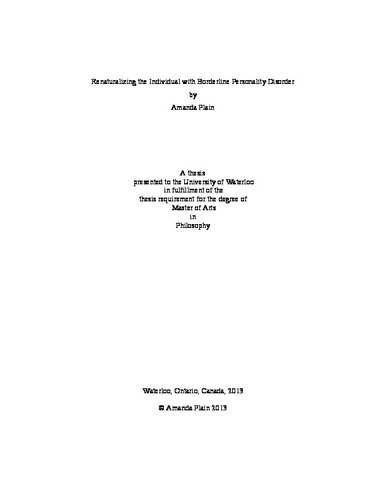 Borderline Personality Disorder (BPD) is among the most troubling Personality Disorders. Individuals with the disorder have exaggerated fears of abandonment, distorted self-identity and problems in interpersonal relationships, and are prone to self-abuse, suicide ideation and attempts, rage and aggression. Furthermore, these individuals have an exceptional aversion to admitting that these problematic behaviours are symptomatic of an underlying disorder, and therefore in accepting responsibility for their behaviour. Using a Spinozist approach, I analyze that we the public share in the responsibility for having a population with BPD. Under the guidance of Hasana Sharp’s Politics of Renaturalization, I argue that the individual with BPD resists accepting responsibility because she is not completely to blame. Spinoza’s radically relational ontology shows that no individual can act without affecting and having been affected by the myriad of other beings, especially other humans. We the public share in the blame for having a population with BPD, and I argue that admitting so will help the individuals with BPD gain self-knowledge and accept their respective share of the responsibility for these problematic behaviours. This will serve the best interests of the public by affording more credence and adding new voices from these personalities in collective conversation