An examination of environmental policy regarding the 2008 Koi Herpesvirus (CyHV-3) outbreak in Lake Simcoe, Ontario, Canada: the disposal of Cyprinus carpio carpio L. on First Nation and off-reserve land 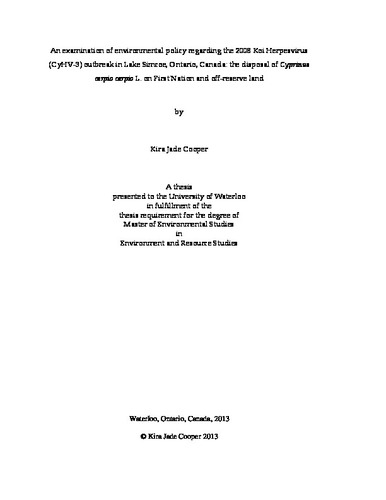 Koi Herpesvirus (KHV), a species-specific DNA virus of the family Herpesviridae, is responsible for mass mortalities of common carp (Cyprinus carpio carpio L.) throughout the world. KHV’s broad geographical distribution and relatively high mortality rate among infected fish, creates significant disposal issues when die-offs occur, especially taking into account the body burden of contaminants in the fish. In locales where adequate disposal facilities are unavailable, or are unable to accommodate additional loadings of contaminated fish carcasses, concerns regarding human and environmental health are raised. During the summer of 2008, residents of the Lake Simcoe Region of southern Ontario, Canada, were faced with a massive die-off of carp, infected with KHV. Carp within the Great Lakes and much of the world are known to bioaccumulate (and biomagnify) contaminants, such as, polychlorinated biphenyls (PCBs), pesticides (e.g., dichlorodiphenyltrichloroethane, DDT, and toxic metals (e.g., mercury). These contaminants have been associated with numerous adverse effects on both human and environmental health, and are thus of important considerations when planning for large-scale carcass disposal, following fish die-offs. Although suites of microbiological tests and water quality assessments are frequently conducted to identify causative factors during extensive fish-kills - assessments of relative contaminant burdens in the carcasses, which should dictate the most appropriate method of carcass disposal - are rarely performed. A case study on Snake Island, Lake Simcoe, Ontario was conducted to further examine the implications of this policy. Soil samples from two known disposal sites and three presumed control locations were sampled on Snake Island and sent to the Analytical Services Unit of Queen’s University for chemical analysis. Although none of the soil samples exceeded any legal guidelines in the present study, there is still concern as future die-offs of other fish species or piscivorous birds and the disposal of large numbers of carcasses may be an issue.