Simone de Beauvoir and The Problem of The Other's Consciousness: Risk, Responsibility and Recognition 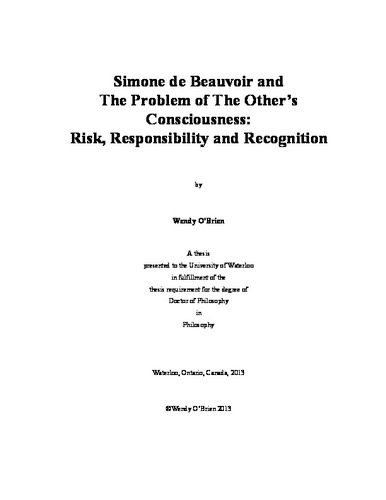 In an interview with Jessica Benjamin and Margaret Simons in 1979, Simone de Beauvoir identified the problem that had preoccupied her across her lifetime, that is, “her” problem, as the problem of the “the consciousness of the other”. In making this claim, she echoed words she had written almost fifty years earlier, when in 1927 as an undergraduate student, she wrote in her journal that what interested her was “almost always this opposition of self and other that I have felt since beginning to live”. In bookending her career in this manner, Beauvoir points her readers to consider her work as a sustained engagement with Hegel’s Phenomenology of Spirit, for it is in this text that this problem takes shape. Hegel traces the journey of spirit from consciousness to Absolute Knowledge. In so doing he provides a description of how it is that the self comes to reside in the other and the other to reside in the self as the hostility that initially leads to the objectification of one by the other gives way to recognition. This study investigates the development of Beauvoir’s understanding of the problem of the other’s consciousness. Three times across her career Beauvoir would turn to Hegel’s text. Using these readings as guideposts, it traces her account of the relationship between self and other from her study of hostility in her early works, through to her discovery of the force of history and the interdependence of subjectivities in her moral period, to her exploration of the forms of reciprocity in her mature studies, finally through to her acknowledgement of mutual recognition via her reflections on writing in her late works.