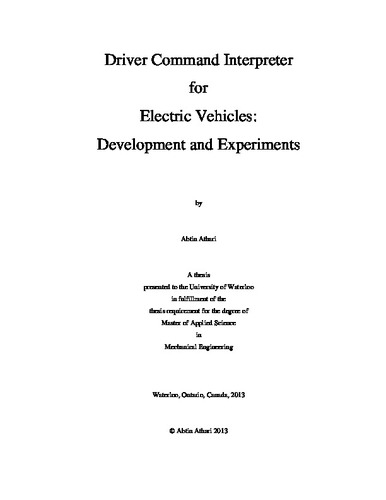 Electric-driven vehicles (EVs) are a relatively new topic in the area of alternative-fuel vehicles. EVs that have the capability for an independent wheel-drive system provide researchers and automakers with numerous benefits. These benefits include sharp torque generation and independent torque control at each wheel, which improves the dynamic stability of EVs on the road, and also increases energy efficiency. Vehicle safety is a major challenge in the field of vehicle dynamics. There is an increasing demand for active safety systems in order to avoid accidents. The focus of this thesis is the development of a Driver Command Interpreter (DCI), which is used in conjunction with an active stability controller. A DCI generates the desired longitudinal and lateral forces and the vehicle’s yaw moment based on the driver’s commands. These forces, as well as the yaw moment, are compared with the actual sensor data commonly mounted at the center of gravity (CG) location to produce error signals for the controller, which is in charge of correcting and stabilizing the vehicle by changing the torque in each wheel. To simplify the computation of the vehicle’s desired forces, a bicycle model is considered, including a full non-linear tire model. An algorithm was developed for the DCI, which is implemented in the Matlab code for simulation purposes. The algorithm is then implemented in the vehicle’s real-time onboard computer to experimentally demonstrate the proposed DCI application to an active stability control. The execution of various standard stability tests prove the acceptable performance and accuracy of the proposed DCI.