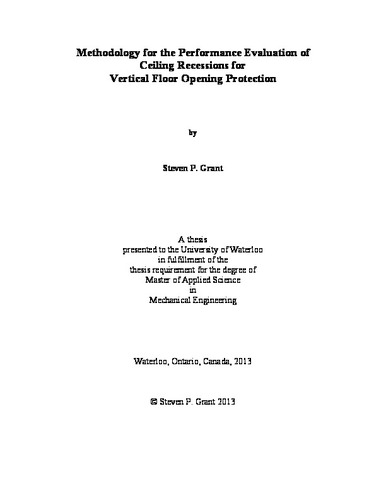 Current Canadian Building Codes mandate prescribed design requirements for the protection of vertical floor openings by means of draft stops and closely spaced sprinklers. In the event that a design cannot meet the requirements, they also allow for the use of an alternative solution as long as the alternative solution can be proven to provide at least an equivalent level of performance as that prescribed in the Code. A commonly suggested alternative to the use of draft stops includes the construction of a recession at the perimeter of the floor opening; however, the performance of this design relative to that of an equivalent draft stop design has not been thoroughly evaluated. In this research, the available methods for the evaluation of ceiling recession designs are reviewed in order to identify appropriate tools with which to conduct such an analysis. While both analytical analysis and experimental testing could be used, experimental testing of the design is not considered here as this option would not commonly be pursued by design teams due to restrictions on both project budget and design timelines. From the available analytical tools, the fire modeling software Fire Dynamics Simulator (FDS) is selected for evaluation of the ceiling recession design due primarily to the ability of FDS to address complex geometries with appropriate spatial resolution to investigate details of flow and thermal profiles at the ceiling level in a larger compartment. Previous FDS studies are reviewed and an independent validation study is conducted in order to develop an analysis methodology which is appropriate for the evaluation of ceiling recession designs. A case study evaluation is conducted consisting of two dimensionally distinct ceiling recession configurations in the same compartment and two separate source fire heat release rates (HRR). Results are analyzed to evaluate the selected analysis methodology with respect to the characteristics of the simulated flow, and thermal detector response. Results show that the presence of an obstruction to the ceiling jet flow significantly improves thermal detector response where the source fire HRR is low. At higher source fire HRRs, the difference in activation time is found to be minimal amongst configurations of ceiling recession considered in the study. Predictions of thermal detector response time for a selected ceiling recession design are compared to predictions made for code-prescribed draft stop configuration as would be necessary for an alternative solution evaluation. Results indicate that ceiling recession designs provide a reduced level of performance at both low and high source fire HRRs when the thermal detector is placed at the recession ceiling level. In contrast, when the thermal detectors are located at distances greater than 80 mm below the upper ceiling, a design which is permitted by the Code, the performance of the ceiling recession appears better than that of the prescribed draft stop design. Results from the model for detectors placed at distances from the ceiling exceeding 40 mm, however, require further confirmation through experimental testing or additional modeling.