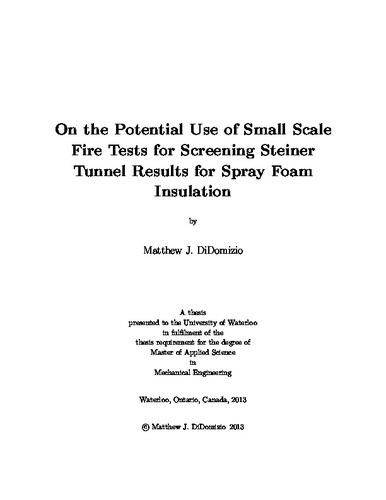 The goal of this study is to assess the potential of using bench-scale fire testing to screen materials for the Steiner tunnel fire test. It is hypothesized that the chemical and physical changes made to a material to improve its fire performance in small scale fire tests will have a predictable response in the Steiner tunnel. This hypothesis is based on the observation that fire test results can, in some cases, provide insight on a material's relative fire hazard, and the assumption that the relative hazard should be consistent across scale. The ASTM E84 Steiner tunnel test provides a relative ranking of material hazard in two categories. The horizontal Flame Spread Index (FSI) is used to rank the flame hazard of a material, and the Smoke Developed Index (SDI) is used to rank the smoke hazard of a material. Two fire tests are proposed to independently assess each hazard at the bench-scale. The ASTM E1354 cone calorimeter test measures a material's open-flaming heat release rate; it is proposed that the cone calorimeter test can be used to assess a material's relative flame hazard. The ISO 5659-2 smoke density chamber test measures a material's closed-environment smoke development; it is proposed that the smoke density chamber test can be used to assess a material's relative smoke hazard. The material selected for this study is fire-retarded sprayed polyurethane foam (FRSPF) insulation. Specific details of the foam chemistry, fire retardants, and the manufacturer are confidential. Generally, the foam can be described as medium-density (approximately 2 lbs/ft³), closed-celled, and semi-rigid. The fire retardant additives are comprised of differing ratios and concentrations of phosphorous- and halogen-containing compounds. A series of 30 Steiner tunnel tests is conducted on 20 different formulations. Repeated testing is conducted on several formulations in order to assess variability in the Steiner tunnel test results. Cone calorimeter and smoke density chamber tests are conducted on a subset of those formulations, in sets of 3-5 tests per formulation. Key performance indicators are identified from each fire test, relationships between those indicators are examined, and correlations are presented where strong relationships are apparent. Empirical prediction models are proposed for FSI and SDI based on the success rate of prediction, and minimization of error between experimental (measured) and modelled (predicted) results. It is concluded that for the materials tested in this study, there is sufficient evidence of consistency in relative performance to recommend bench-scale screening tests as a cost-effective alternative to repeated Steiner tunnel testing.