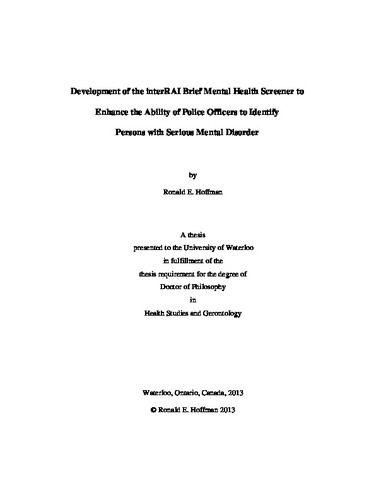 Background: Police officers are often the first to respond when persons experience a mental health crisis in the community. They must de-escalate volatile situations involving persons with serious mental disorder (PSMD) and bring the person to the attention of either the criminal justice or mental health care system. It is argued that issues such as repeated police contact, excessive emergency department (ED) wait times, and the criminalization of the mentally ill are evidence that the current system lacks the ability to meet the needs of PSMD. Critics have argued the source of the problem is inadequate police training, and insufficient and poorly organized community mental health services. Others claim that the underlying issue is that the current system for responding to PSMD is dysfunctional. The model is based on the concept that the best way to meet the needs of PSMD is through the integration of systems and services which to date, has remained an impossible goal. Given the current system will not be replaced anytime soon, efforts should be directed toward developing innovative ways to make it easier for the systems to work more effectively together. Objectives: The major objective of this dissertation was to develop and pilot a new mental health screening form, the interRAI Brief Mental Health Screener (BMHS)* to enhance the ability of police officers to identify PSMD, and to support their decision-making. A second objective was to develop a model that best predicts which persons are most likely to be taken to hospital by police officers and which persons most likely to be admitted. A final objective was to analyze the impact that interacting with PSMD has on police resources in terms of the amount of time police officers spend on mental health related calls for service. Methodology: Logistic regression analysis was used to identify 14 predictors of serious mental health disorders from 41,019 cases obtained from the main Resident Assessment Instrument for Mental Health (RAI-MH) database. The RAI-MH is a comprehensive mental health assessment system that is currently used for all persons admitted into a psychiatric hospital in Ontario. Additional clinical, demographic and contextual items were added after consultation with an advisory committee composed of representatives from hospitals and police services resulting in a pilot version of the interRAI BMHS. The County of Wellington and the city of Guelph were selected as the setting for the pilot that included 4 general hospitals, 1 psychiatric facility and the participation of the Ontario Provincial Police (OPP) and the Guelph Police Service. After training police officers to use the new form, the interRAI BMHS was pilot tested over a seven month period commencing May 2011. Hospital records were also accessed to determine patient disposition. Logistic regression was used to develop an algorithm to identify the persons with the highest probability of being taken to hospital by police officers, and those persons who were most likely to be admitted. Results: Police officers from the two jurisdictions in Ontario completed a total of 235 interRAI BMHS forms. Chi square analysis revealed the most common reasons why police officers take persons to hospital included the person considering performing a self-injurious act in the past 30 days, and family, and others were concerned the person was at risk for self-injury. Intoxication by drugs or alcohol and having symptoms of psychosis were not significant reasons for police officers to take a person to hospital. The variables most associated with being admitted after being taken to hospital, included indicators of disordered, such as lack of insight into their mental health problems, abnormal thought process, delusions and hallucinations. Overall, although the terminology differed, the same patterns emerged in the pilot study that previous research reported. Police officers tend to focus on dangerousness and public safety, while clinicians are concerned with indicators of disordered thought. Logistic regression analysis revealed that the 14 variable algorithm used to construct the interRAI BMHS was a good predictor of who was most likely to be taken to hospital by police officers, and who was most likely to be admitted. Another important finding was that the reasons why police officers take persons to hospital were not the same as the reasons why persons are subsequently admitted. This suggests the criminal justice, health and mental health systems are not synchronized. The research also revealed that police officers spend a mean time of over three hours overall devoted to calls for service involving PSMD, and a mean time of just over three hours waiting in the ED. Conclusion: The interRAI BMHS provides useful information for both police officers and ED staff regarding the variables significantly associated with serious mental disorder. It will help support police officer and ED decision-making, and it will contribute to enhancing the training provided to police officers and mental health service providers. Additional research and larger sample sizes will help to further refine the instrument. The interRAI BMHS is based on health system data and written in the language of the health system. As such, it has the potential to both enhance the ability of police officers and other mental health service providers to identify indicators of serious mental disorder, and to help synchronize the criminal justice and mental health care systems. *interRAI stands for the international resident assessment instrument, in international collaborative to improve the quality of life of vulverable persons through a seamless comprehensive assessment system.