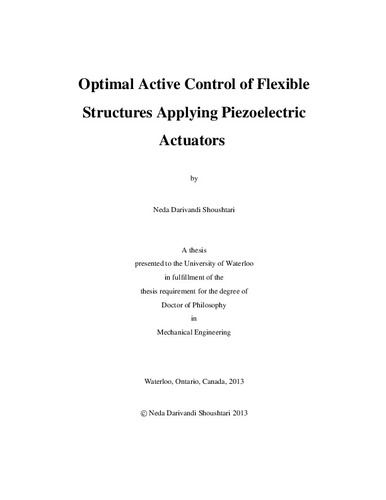 Piezoelectric actuators have proven to be useful in suppressing disturbances and shape control of flexible structures. Large space structures such as solar arrays are susceptible to large amplitude vibrations while in orbit. Moreover, Shape control of many high precision structures such as large membrane mirrors and space antenna is of great importance. Since most of these structures need to be ultra-light-weight, only a limited number of actuators can be used. Consequently, in order to obtain the most effcient control system, the locations of the piezoelectric elements as well as the feedback gain should be optimized. These optimization problems are generally non-convex. In addition, the models for these systems typically have a large number of degrees of freedom. Researchers have used numerous optimization criteria and optimization techniques to find the optimal actuator locations in structural shape and vibration control. Due to the non-convex nature of the problem, evolutionary optimization techniques are extensively used. However, One drawback of these methods is that they do not use the gradient information and so convergence can be very slow. Classical gradient-based techniques, on the other hand, have the advantage of accurate computation; however, they may be computationally expensive, particularly since multiple initial conditions are typically needed to ensure that a global optimum is found. Consequently, a fast, yet global optimization method applicable to systems with a large number of degrees of freedom is needed. In this study, the feedback control is chosen to be an optimal linear quadratic regulator. The optimal actuator location problem is reformulated as a convex optimization problem. A subgradient-based optimization scheme which leads to the global solution of the problem is introduced to optimize the actuator locations. The optimization algorithm is applied to optimize the placement of piezoelectric actuators in vibration control of flexible structures. This method is compared with a genetic algorithm, and is observed to be faster in finding the global optimum. Moreover, by expanding the desired shape into the structure’s modes of vibration, a methodology for shape control of structures is presented. Applying this method, locations of piezoelectric actuators on flexible structures are optimized. Very few experimental studies exist on shape and vibration control of structures. To the best knowledge of the author, optimal actuator placement in shape control has not been experimentally studied in the past. In this work, vibration control of a cantilever beam is investigated for various actuator locations and the effect of optimal actuator placement is studied on suppressing disturbances to the beam. Also using the proposed shape control method, the effect of optimal actuator placement is studied on the same beam. The final shape of the beam and input voltages of actuators are compared for various actuator placements.