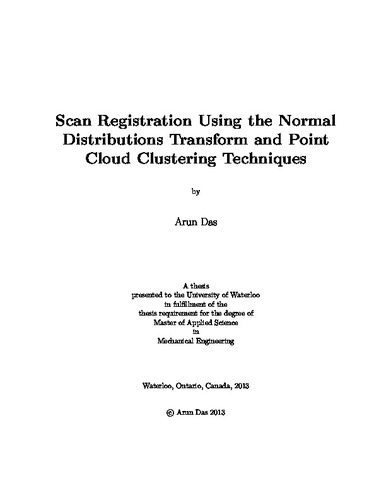 As the capabilities of autonomous vehicles increase, their use in situations that are dangerous or dull for humans is becoming more popular. Autonomous systems are currently being used in several military and civilian domains, including search and rescue operations, disaster relief coordination, infrastructure inspection and surveillance missions. In order to perform high level mission autonomy tasks, a method is required for the vehicle to localize itself, as well as generate a map of the environment. Algorithms which allow the vehicle to concurrently localize and create a map of its surroundings are known as solutions to the Simultaneous Localization and Mapping (SLAM) problem. Certain high level tasks, such as drivability analysis and obstacle avoidance, benefit from the use of a dense map of the environment, and are typically generated with the use of point cloud data. The point cloud data is incorporated into SLAM algorithms with scan registration techniques, which determine the relative transformation between two sufficiently overlapping point clouds. The Normal Distributions Transform (NDT) algorithm is a promising method for scan registration, however many issues with the NDT approach exist, including a poor convergence basin, discontinuities in the NDT cost function, and unreliable pose estimation in sparse, outdoor environments. This thesis presents methods to overcome the shortcomings of the NDT algorithm, in both 2D and 3D scenarios. To improve the convergence basin of NDT for 2D scan registration, the Multi-Scale k-Means NDT (MSKM-NDT) algorithm is presented, which divides a 2D point cloud using k-means clustering and performs the scan registration optimization over multiple scales of clustering. The k-means clustering approach generates fewer Gaussian distributions when compared to the standard NDT algorithm, allowing for evaluation of the cost function across all Gaussian clusters. Cost evaluation across all the clusters guarantees that the optimization will converge, as it resolves the issue of discontinuities in the cost function found in the standard NDT algorithm. Experiments demonstrate that the MSKM-NDT approach can be used to register partially overlapping scans with large initial transformation error, and that the convergence basin of MSKM-NDT is superior to NDT for the same test data. As k-means clustering does not scale well to 3D, the Segmented Greedy Cluster NDT (SGC-NDT) method is proposed as an alternative approach to improve and guarantee convergence using 3D point clouds that contain points corresponding to the ground of the environment. The SGC-NDT algorithm segments the ground points using a Gaussian Process (GP) regression model and performs clustering of the non ground points using a greedy method. The greedy clustering extracts natural features in the environment and generates Gaussian clusters to be used within the NDT framework for scan registration. Segmentation of the ground plane and generation of the Gaussian distributions using natural features results in fewer Gaussian distributions when compared to the standard NDT algorithm. Similar to MSKM-NDT, the cost function can be evaluated across all the clusters in the scan, resulting in a smooth and continuous cost function that guarantees convergence of the optimization. Experiments demonstrate that the SGC-NDT algorithm results in scan registrations with higher accuracy and better convergence properties than other state-of-the-art methods for both urban and forested environments.