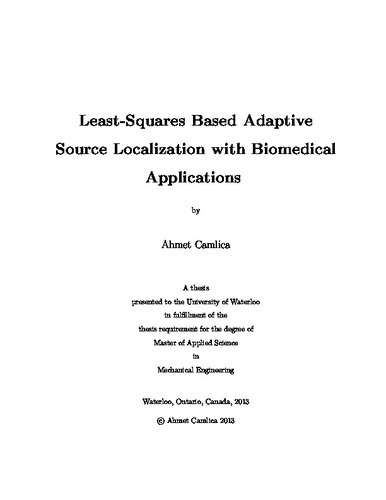 In this thesis, we study certain aspects of signal source/target localization by sensory agents and their biomedical applications. We first focus on a generic distance measurement based problem: Estimation of the location of a signal source by a sensory agent equiped with a distance measurement unit or a team of such a sensory agent. This problem was addressed in some recent studies using a gradient based adaptive algorithm. In this study, we design a least-squares based adaptive algorithm with forgetting factor for the same task. Besides its mathematical background, we perform some simulations for both stationary and drifting target cases. The least-squares based algorithm we propose bears the same asymptotic stability and convergence properties as the gradient algorithm previously studied. It is further demonstrated via simulation studies that the proposed least-squares algorithm converges significantly faster to the resultant location estimates than the gradient algorithm for high values of the forgetting factor, and significantly reduces the noise effects for small values of the forgetting factor. We also focus on the problem of localizing a medical device/implant in human body by a mobile sensor unit (MSU) using distance measurements. As the particular distance measurement method, time of flight (TOF) based approach involving ultra wide-band signals is used, noting the important effects of the medium characteristics on this measurement method. Since human body consists of different organs and tissues, each with a different signal permittivity coefficient and hence a different signal propagation speed, one cannot assume a constant signal propagation speed environment for the aforementioned medical localization problem. Furthermore, the propagation speed is unknown. Considering all the above factors and utilizing a TOF based distance measurement mechanism, we use the proposed adaptive least-square algorithm to estimate the 3-D location of a medical device/implant in the human body. In the design of the adaptive algorithm, we first derive a linear parametric model with the unknown 3-D coordinates of the device/implant and the current signal propagation speed of the medium as its parameters. Then, based on this parametric model, we design the proposed adaptive algorithm, which uses the measured 3-D position of the MSU and the measured TOF as regressor signals. After providing a formal analysis of convergence properties of the proposed localization algorithm, we implement numerical tests to analyze the properties of the localization algorithm, considering two types of scenarios: (1) A priori information regarding the region, e.g quadrant (among upper-left, upper-right, lower-left, lower-right of the human body), of the implant location is available and (2) such a priori information is not available. In (1), assuming knowledge of fixed average relative permittivity for each region, we established that the proposed algorithm converges to an estimate with zero estimation error. Moreover, different white Gaussian noises are added to emulate the TOF measurement disturbances, and it is observed that the proposed algorithm is robust to such noises/disturbances. In (2), although perfect estimation is not achieved, the estimation error is at a low admissible level. In addition, for both cases (1) and (2), forgetting factor effects have been investigated and results show that use of small forgetting factor values reduces noise effects significantly, while use of high forgetting factor values speeds up convergence of the estimation.