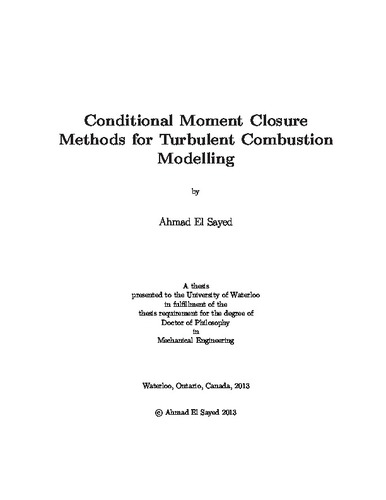 This thesis describes the application of the first-order Conditional Moment Closure (CMC) to the autoignition of high-pressure fuel jets, and to piloted and lifted turbulent jet flames using classical and advanced CMC submodels. A Doubly-Conditional Moment Closure (DCMC) formulation is further proposed. In the first study, CMC is applied to investigate the impact of C₂H₆, H₂ and N₂ additives on the autoignition of high-pressure CH₄ jets injected into lower pressure heated air. A wide range of pre-combustion air temperatures is considered and detailed chemical kinetics are employed. It is demonstrated that the addition of C₂H₆ and H₂ does not change the main CH₄ oxidisation pathways. The decomposition of these additives provides additional ignition-promoting radicals, and therefore leads to shorter ignition delays. N₂ additives do not alter the CH₄ oxidisation pathways, however, they reduce the amount of CH₄ available for reaction, causing delayed ignition. It is further shown that ignition always occurs in lean mixtures and at low scalar dissipation rates. The second study is concerned with the modelling of a piloted CH₄/air turbulent jet flame. A detailed assessment of several Probability Density Function (PDF), Conditional Scalar Dissipation Rate (CSDR) and Conditional Velocity (CV) submodels is first performed. The results of two β-PDF-based implementations are then presented. The two realisations differ by the modelling of the CSDR. Homogeneous (inconsistent) and inhomogeneous (consistent) closures are considered. It is shown that the levels of all reactive scalars, including minor intermediates and radicals, are better predicted when the effects of inhomogeneity are included in the modelling of the CSDR. The two following studies are focused on the consistent modelling of a lifted H₂/N₂ turbulent jet flame issuing into a vitiated coflow. Two approaches are followed to model the PDF. In the first, a presumed β-distribution is assumed, whereas in the second, the Presumed Mapping Function (PMF) approach is employed. Fully consistent CV and CSDR closures based on the β-PDF and the PMF-PDF are employed. The homogeneous versions of the CSDR closures are also considered in order to assess the effect of the spurious sources which stem from the inconsistent modelling of mixing. The flame response is analysed over a narrow range of coflow temperatures (Tc). The stabilisation mechanism is determined from the analysis of the transport budgets in mixture fraction and physical spaces, and the history of radical build-up ahead of the stabilisation height. The β-PDF realisations indicate that the flame is stabilised by autoignition irrespective of the value of Tc. On the other hand, the PMF realisations reveal that the stabilisation mechanism is susceptible to Tc. Autoignition remains the controlling stabilisation mechanism for sufficiently high Tc. However, as Tc is decreased, stabilisation is achieved by means of premixed flame propagation. The analysis of the spurious sources reveals that their effect is small but non-negligible, most notably within the flame zone. Further, the assessment of several H₂ oxidation mechanisms show that the flame is very sensitive to chemical kinetics. In the last study, a DCMC method is proposed for the treatment of fluctuations in non-premixed and partially premixed turbulent combustion. The classical CMC theory is extended by introducing a normalised Progress Variable (PV) as a second conditioning variable beside the mixture fraction. The unburnt and burnt states involved in the normalisation of the PV are specified such that they are mixture fraction-dependent. A transport equation for the normalised PV is first obtained. The doubly-conditional species, enthalpy and temperature transport equations are then derived using the decomposition approach and the primary closure hypothesis is applied. Submodels for the doubly-conditioned unclosed terms which arise from the derivation of DCMC are proposed. As a preliminary analysis, the governing equations are simplified for homogeneous turbulence and a parametric assessment is performed by varying the strain rate levels in mixture fraction and PV spaces.