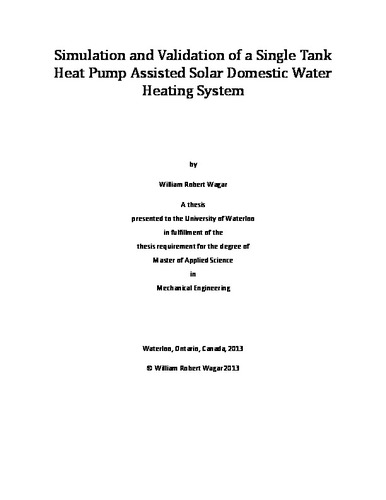 This thesis is a study of an indirect heat pump assisted solar domestic hot water (I-HPASDHW) system, where the investigated configuration is called the Dual Side I-HPASDHW system. The study outlines the development of an Experimental Test Unit (ETU), and focuses on the experimental validation of TRNSYS models. Shortcomings of the system design realized throughout the validation process, as well as weaknesses in the control schemes used to operate the system are also provided. A description of the Dual Side I-HPASDHW system is provided along with the design intent of the system. The corresponding ETU is presented in detail to provide a comprehensive understanding of the ETU’s simulation capabilities. Components of the ETU, such as the heat pump, heat exchanger, and domestic hot water (DHW) tank are characterized in order to provide input data for built-in TRNSYS models, and to develop custom TRNSYS models for the heat pump and heat exchanger. Heat exchanger performance is modelled with a linear correlation, while the heat pump performance is mapped by applying experimental data to three-dimensional surface fitting software. For the purpose of validation, the ETU is used to simulate the performance of the Dual Side I-HPASDHW system under a realistic control scheme. Four full day tests are conducted using data from a fall, winter, and summer day. The full day summer test is repeated with and without electrical backup heating. The TRNSYS model of the Dual Side system is tuned in order to provide the closest match possible between the computer simulation and the measured performance of the ETU. Experimental tests were compared with TRNSYS simulations to reveal some disparity in the results. The majority of simulation error was attributed to inaccuracy in modeling DHW tank temperatures and water circulation patterns. The disparity created by the DHW tank model only resulted in substantial performance deviation when inaccurate DHW temperatures were used directly for vital control decisions. Conclusions were drawn suggesting that the TRNSYS model of the ETU was valid for a majority of operating conditions, often matching experimental tests well within experimental uncertainty. Caution was recommended towards the use of the developed TRNSYS model, where techniques were recommended for tracking and minimizing substantial simulation errors. Several key performance issues affecting the Dual Side I-HPASDHW system were targeted with recommendations for design and control alterations, along with future improvement and optimization studies.