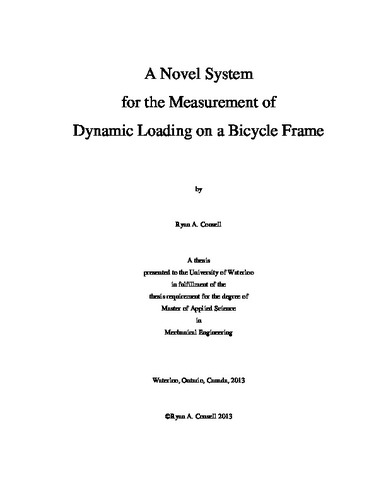 The design of bicycle frames has remained fairly static for the majority of the past century, but recent increases in demand for high performance bicycles has created an accelerated design cycle that requires innovation. In order to design new frames with confidence in their capacity to withstand the rigors of use, reliable data about the nature of that use is needed, but this data is not currently available. The purpose of this research was to develop and implement a system that is capable of interpolating loads applied to a bicycle frame during vigorous riding for the purpose of improving the quality of information available to bicycle designers. The system that was developed employed finite element modeling to locate strain gauges on a frame and a least-squares approximate solution of strain readings to interpolate the applied loads. At its best, the system is capable of resolving loads with better than a 2% error. This system is limited, though, as it can only be applied in cases where the frame has a significant strain reaction to a load case but does not have a significant change in geometry during loading. This system was implemented on a cross-country mountain bicycle frame for the purposes of determining a rider weight to load relationship and to compare the standardized test procedures for bicycles to the loads experienced in the field. It was confirmed that there is a linear relationship between rider weight and load on the frame for all component forces except that applied to the bottom bracket, out of plane with the bicycle frame. It was also found that the British Standards fatigue testing practices, which are used internationally to assess bicycle safety, are inconsistent in their representation of realistic riding conditions when compared with the results from the field tests. Some loads appear conservative, some offer a very large factor of safety, and two are not represented at all. In particular, the moment about the bottom bracket due to pedaling and the load on the seat from the rider appear to consistently exceed the standardized test requirements while the moment caused by fork splay seems much smaller than the tests demand.