The Development of Dark/Cultural Heritage as Attractions in Falmouth, Jamaica, West Indies 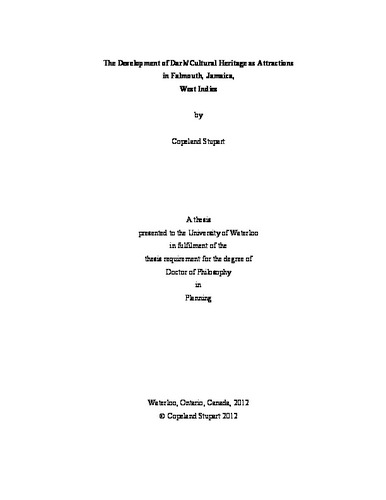 The Caribbean, which is one of the most tourism-dependent regions of the world, is rich in cultural heritage, but it lacks developed and attractive cultural heritage sites. In particular, this is true for attractions that make use of the “dark” cultural heritage of the region which is associated with the Transatlantic Trade in Africans as slaves. This lack is seen as a major weakness in the region’s tourism product. This research explores the development of “dark” cultural heritage resources as attractions in the town of Falmouth, Jamaica, an 18th century port town that had a thriving economy during the peak period of British colonialism and the trade in Africans as slaves. Today, the economic importance of Falmouth is only a shadow of what it was during the infamous “glorious” days when sugarcane was “king and money in abundance” and Jamaica a leading sugar exporting colony was seen as a “jewel” in the English crown. A concurrent mixed method approach was used in the study where both qualitative and quantitative data from primary and secondary sources were collected and analysed. The methods that were used for data collection include questionnaire survey, semi-structured interviews, historical research and townscape survey. A systematic sampling technique was used to randomly select 100 households for a face-to-face questionnaire survey which achieved a 94% response rate. On the other hand, the purposive and snowball sampling methods were used to select twelve stakeholders for in-depth semi-structured interviews to ascertain their expectations and perspectives about the cultural heritage of the town. The textual data generated from the interviews were studied using content analysis, where substantive statements were identified from individual transcripts. Also, most appropriately, historical research was conducted to collect and evaluate historical information, such as written testimonies of eyewitnesses to events and also written accounts by person not immediately present at the time, but who obtained their description of events from someone else. In addition, a townscape survey was carried out to map, collect and evaluate data on a number of cultural heritage resources in Falmouth. It involved detailed field observation and the recording of the quality of townscape elements that are evaluated based on established criteria. Overall, the residents strongly supported tourism and argued for its development and expansion in Falmouth. They believed that the environmental, economic and socio-cultural benefits from tourism outweighed the negative implications of which they are fully aware. The data collection methods unearthed and confirmed that there is an abundance of dark cultural heritage in Falmouth that is associated with the Transatlantic Trade in Africans as slaves. Both tangible and intangible, highly rated cultural heritage resources were identified mainly in the Historic District. In all, twenty-seven cultural heritage resources and features that have the potential to be developed as attractions in support of a dark cultural heritage theme were identified, evaluated and catalogued. The major constraints to heritage development that were cited include: financial, psychological, absentee land owners, heritage designation’s restrictions, lack of consensus on developmental issues and some negative social perceptions. Residents and stakeholders suggested the following strategies to engage locals: sensitizing them to heritage development; providing them with information about opportunities as a result of the development; giving them practical information on ways to improve structures and restore buildings; providing them with information and education to build awareness about the cultural heritage of the town; and a public education campaign. Also, residents are amenable to: tour guiding, bed and breakfast operators, visitors’ service employees and involvement in planning conservation efforts. Residents attached a very high positive value to the cultural heritage resources of Falmouth even though they are aware that a lot of it is associated with the Transatlantic Trade. Such dark cultural heritage is deemed a significant part of the town’s heritage, so it is appropriate to use it for developing attractions for future generations where visitors can learn and be educated about the impact of the Transatlantic Trade. This position that the town should be developed as a destination where visitors can learn about slavery was supported by approximately 94% of the respondents to the questionnaire survey. Thus, the residents of Falmouth are motivated to tell the true story of the place. They unanimously are of the opinion that action should be taken to: promote Falmouth as a tourist destination, clean up and beautify Falmouth and provide job training for residents. Additional agreed and suggested actions include: infrastructure development; the development of educational awareness programmes; the development of heritage resources and related infrastructure; providing loans; grants and subsidies to building owners, building citizens’ awareness of cultural heritage and heritage programs; the provision of more entertainment facilities and activities; the development of Falmouth and addressing the cultural heritage of the town; A Master Plan is needed with a systematic way for its implementation along with the requisite funding; the implementation of a legislative framework to protect the town’s cultural heritage; the building of consensus among stakeholders; establishing a framework for the funding of restoration; engaging local and international organizations such as the JNHT and UNESCO; the sharing of plans at town-hall meetings; convene a meeting of all training agencies; and the development and implementation of a master plan. This research explored the development of Falmouth that has a “dark” and contested heritage, for sightseeing, learning and as an exemplary place for authentic experiences of identity for the African Diaspora. It will indeed help in the process to diversify Jamaica’s tourism product, contributes to the development of awareness and understanding of heritage at sensitive sites that are linked to humankind’s suffering and mass death. Finally, the study complements the UNESCO’s Slave Route Project that seeks to put an end to the historical silence on the African slave trade and slavery in general. The research concluded with a proposed planning framework for developing and promoting dark cultural heritage attractions.