Identity, Psychological Safety and Social Capital: A mixed methods examination of their influence on knowledge use in the context of LEARN Communities of Practice 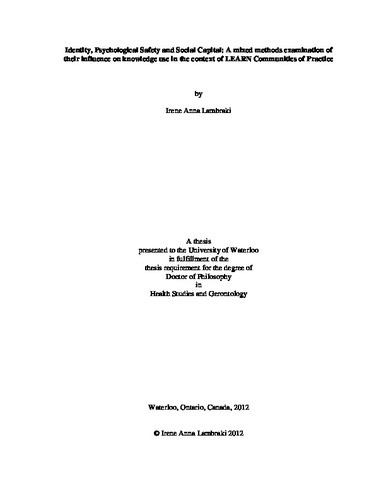 There is a strong push in public health for multi-faceted partnerships to develop practice-relevant evidence that effectively address complex risk factors like tobacco use. Consequently, new partnership structures that cross-cut different social groups are emerging to harness their distinct knowledge and generate actionable breakthroughs. Little is known about these structures, particularly informal ones that hinge on voluntary group membership like Communities of Practice (CoPs). Specifically, little is known about the factors/processes that enable people representing different social groups to translate their knowledge across group boundaries and co-create knowledge that informs action in these informal structures. Calls to develop/test theories, frameworks, and models are made to enlighten these gaps. This study responded to these calls by developing and testing a conceptual framework. The framework asserts that a shared identity, member identification / sense of belonging, social capital and psychological safety contribute to diverse people cohering into a collective, which was deemed important to enable knowledge to translate across group boundaries. The study examined how each factor influenced and inter-related to influence the use of CoP-related knowledge and its different types (with an emphasis on conceptual and instrumental uses). The study also examined what factors contributed to or detracted from these relationships in the context of the Program Training and Consultation Centre’s tobacco control specific Learning through Evidence and Action Reflection Network (LEARN) Community of Practice (CoP) project. Following a pragmatist orientation, a two-phased quant-QUAL sequential, explanatory mixed-methods embedded case study design was employed. The LEARN CoP project formed the case study and two CoPs that comprised that project formed the embedded units. Phase I of the study involved a quantitative survey that was completed by 35 of 58 eligible LEARN CoP members. The Phase II dominant qualitative study involved ~90 minute audio-recorded telephone interviews of 14 LEARN CoP members (seven per embedded unit) who comprised a subset of Phase I survey respondents (nested sampling approach). CoP documents (meeting minutes, audio-recorded meetings, Community Charters and Learning Agendas, WebEx™ discussion posts) served as supplementary data sources. Phase I quantitative analyses examined whether each factor of interest predicted knowledge use using simple and multiple linear regression, tested an analytic model that proposed shared identity led to knowledge use via the mediators member identification, social capital and psychological safety using Baron & Kenny’s (1986) mediation approach and Goodman’s Test (1960) for confirmation. As a prelude to the Phase II qualitative study, descriptive statistics, t-tests and ANOVA were conducted to discern how the LEARN CoP and more specifically each of its embedded units (CoP A and CoP B) were developing with respect to the factors of interest and what differences existed between the two communities. Phase I findings loosely informed the focus of the Phase II qualitative study and data were coded and analysed using open, axial and selective coding procedures (Strauss & Corbin, 1990). Phase I and Phase II data were compared and contrasted in the discussion, with greater emphasis placed on the qualitative findings. Overall findings revealed that in the LEARN CoP case, each factor in the conceptual framework influenced how members used knowledge gained in the CoP. These factors also inter-related in ways that helped diverse members to cohere in ways that influenced knowledge use. Shared identity, member identification / sense of belonging and psychological safety were related to conceptual types of knowledge use (increased awareness, learning as a result of CoP knowledge). Social capital was the only factor that was related to both conceptual and instrumental types of CoP knowledge use (e.g., knowledge gained from the CoP was used to inform decision making or applied in some fashion in practice). However, member identification / sense of belonging emerged as an important theme that motivated members to interact and build social capital which in turn led to instrumental types of knowledge use. A superordinate identity (shaped by a common and actionable purpose) helped members to jel together despite representing different social groups by serving as an anchor point for member identification / sense of belonging. The CoP’s ‘alignment’ with the philosophies, culture and priorities of important entity’s that shaped the CoP’s work (e.g., government and the organizations that members represented) also influenced the use of CoP knowledge. Other factors including relevant knowledge, leadership (including member roles), and a variety of mechanisms that enabled interaction (i.e., in-person meetings, WebEx, teleconferences, structured time for practice sharing, working groups) contributed to or detracted from the relationships found in the study. Solving complex problems like tobacco-related chronic diseases necessitates building multi-faceted partnership structures that connect different configurations of an existing or desired system and their respective knowledge. This is not an easy task because it requires bringing together people representing potentially different social identities that possess their own ways of thinking and doing, which can limit knowledge use. This study sought to understand how factors that help diverse people to cohere into a collective enhance knowledge use. The study highlights the need to understand identity-based issues at play when people from different social groups are brought together in partnership structures like the formally instituted, voluntary CoP examined. Cultivating a shared identity and sense of belonging can bridge silos and motivate people to engage in behaviours that build rich pools of social capital. These factors together can enhance the co-creation and use of evidence and collective action that can save lives.

Irene Anna Lambraki (2013). Identity, Psychological Safety and Social Capital: A mixed methods examination of their influence on knowledge use in the context of LEARN Communities of Practice. UWSpace. http://hdl.handle.net/10012/7284