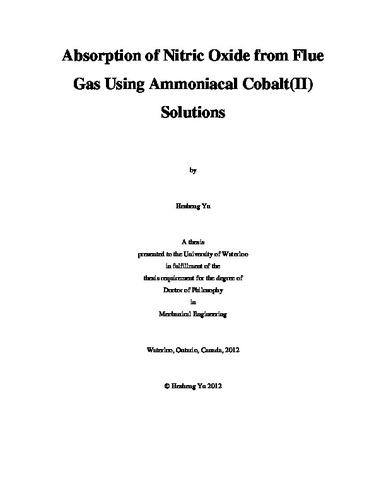 Air emissions from the combustion of fossil fuel, including carbon dioxide, sulfur dioxide, nitrogen dioxide and nitric oxide, have caused severe health and environmental problems. The post-combustion wet scrubbing has been employed for control of carbon dioxide and sulfur dioxide emissions. However, it is restricted by the sparingly water soluble nitric oxide, which accounts for 90-95% of nitrogen oxides. It is desirable and cost-effective to remove nitric oxide from flue gas by existing wet scrubbers for reduced capital costs and foot prints. In this research, absorption of nitric oxide from simulated flue gas using three different absorbents was first conducted in a bubble column system at room temperature and atmospheric pressure. Through performance comparison, ammoniacal cobalt(II) solutions were chosen as the optimum absorbent for nitric oxide absorption. Then the effects of fresh absorbent composition, pH value and temperature on nitric oxide absorption were investigated. Experimental results showed that the best initial NO removal efficiency of 96.45% was measured at the inlet flow rate of 500 mL·min-1; the room temperature of 292.2 K; the pH value of 10.50; and the concentrations of cobalt(II) solution, NO and O2 of 0.06 mol·L-1, 500 ppmv and 5.0%, respectively. For in-depth understanding of NO absorption into ammoniacal cobalt(II) complexes, equilibrium constants of reactions between nitric oxide and penta- and haxa-amminecobalt(II) solutions, respectively were determined using a bubble column reactor, in which the operation was performed continuously with respect to gas phase and batch-wise with respect to liquid phase. The experiments were conducted at temperatures from 298.2 to 310.2 K and pH from 9.06 to 9.37, all under atmospheric pressure. All experimental data fitted well to the following equations: K_NO^5=1.90×10^7 exp(3598.5/T) and K_NO^6=3.56×10^11 exp(1476.4/T), which give the enthalpy of reactions between NO and penta- and hexa-amminecobalt (II) nitrates as ∆H^5=-29.92 kJ·mol^(-1) and ∆H^6=-12.27 kJ·mol^(-1). In kinetic study, a number of experiments were conducted in a home-made double-stirred reactor at temperatures of 298.2 and 303.2 K and pH from 8.50 to 9.87 under atmospheric pressure. The reaction rate constants were calculated with the use of enhancement factor derived for gas absorption accompanied by parallel chemical reactions. The reaction between NO and pentaaminecobalt(II) was first order with respect to NO and pentaamminecobalt(II) ion, respectively. Similarly, the reaction between NO and hexaaminecobalt(II) was also first order with respect to NO and hexaamminecobalt(II) ion, respectively. The forward reaction rate constants of these two reactions were 6.43×10^6 and 1.00×10^7 L·mol-1·s-1, respectively at 298.2 K, and increased to 7.57×106 and 1.12×107 L∙mol-1∙s-1, respectively at 303.2 K. Furthermore, regeneration of used absorbent was attempted but fails. None of the additives tested herein including potassium iodide (KI), sodium persulphate (Na2S5O8) and activated carbon (AC) showed capability of regeneration at room temperature and atmospheric pressure. In addition, the effect of oxygen was investigated. With ammoniacal cobalt(II) compounds a positive effect of oxygen on NO absorption was observed. Calculated NO amount absorbed into the aqueous solution showed that with the oxygen the absorption reaction could be considered as irreversible. This fact was probably the reason for the failure of regeneration of the tested reagents. Last but not least, volumetric liquid-phase mass transfer coefficient, kLa, in some popular industrial absorbers including bubble column (BC), conventional stirred tank reactor (CSTR) and gas-inducing agitated tank (GIAT) were determined by modeling removal of oxygen from water. The experimental results could be well interpreted by mathematical models with 90% of deviations less than ±10 %.