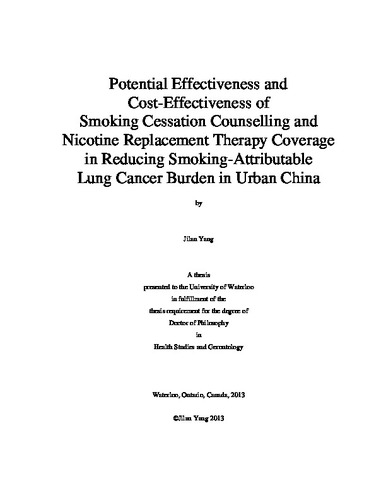 Background: Currently, there are no population-level smoking cessation interventions widely promoted in China. Economic concerns are one of the major barriers to a greater promotion of smoking cessation interventions in China. Objectives: The objective of this study was to use evidence on the effectiveness of physician counselling and nicotine replacement therapy (NRT) patches use from Western countries, with the most recent smoking data from China to predict the potential effectiveness and cost-effectiveness of physician counselling and NRT patch in the healthcare system in urban China. Methods: In Study 1, statistical analysis was conducted to estimate smoking and cessation rates in urban China. In Study 2, a Comparative Relative Assessment model was used to estimate the effectiveness and cost-effectiveness of physician counselling and NRT patch use for smoking cessation. Study 2 determined the estimates and costs of additional quitters and avoided lung cancer deaths from the implementation of physician counselling and NRT patch use in the healthcare system in urban China. Results: In Study 1, smokers intending to quit were significantly more likely to have quit at follow-up than those not intending to quit. A total of 35.4% of smokers in urban China reported visiting a doctor in the past 12 months. Smokers who visited a doctor were significantly more likely to intend to quit and to have quit smoking at follow- up compared to those who did not visit a doctor. In Study 2, brief counselling to all smokers visiting the healthcare system in China was the most effective and cost-effective smoking intervention by generating a total of 2.35 million quitters at $2.32-$7.73 per quitter. Smoking cessation counselling were found to be cost saving when compared with the total cost of lung cancer to Chinese society. The wide promotion of the NRT patch would be costly, requiring significant financial investments. Conclusions: Implementing smoking cessation counselling in the healthcare system in urban China will result in cost savings from lung cancer. The high retail price and low acceptance of NRT patches in China may be required to achieve a population-level impact from pharmaceutical interventions.