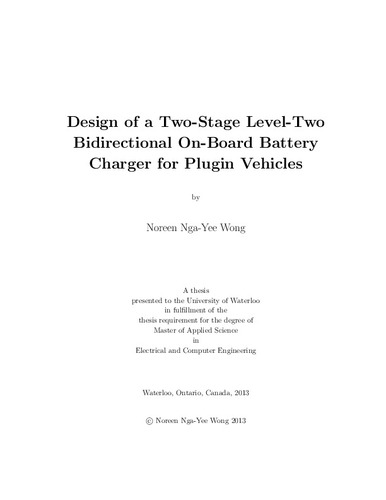 Depletion of fossil fuel reserves, increasing awareness of air pollution levels and continuous rise in gasoline prices are some of the major drives that have been revolutionizing the automotive industry since the last decade. These factors combined are causing conventional automobiles with internal combustion engines (ICE) to be replaced with plugin vehicles. The on-board rechargeable battery packs in plugin vehicles can be recharged by connecting to the utility grid using a plug. The energy stored in the on-board battery packs has attractive benefits for grid support, and this promotes the idea of Vehicle-to-Grid (V2G). V2G power transactions allow energy from the on-board battery packs to be sent back to the utility grid for support in peak shaving and provide reactive power compensation. One natural consequence that arises with the introduction of V2G is a sharp increase in the need for high-performance power electronic interface between the utility grid and the battery pack. Therefore, research on bidirectional battery chargers for plugin vehicles is imperative in order to aid in the promotion of V2G. This thesis focuses on the design and development in a two-stage level-two on-board bidirectional battery charger.