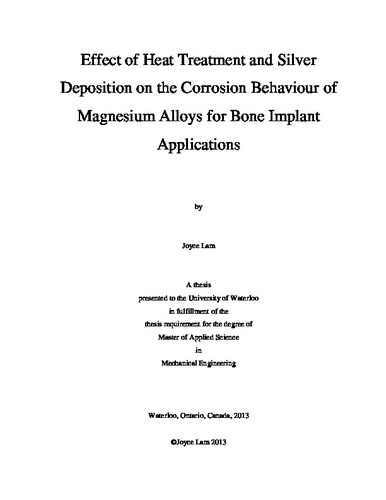 Pure magnesium (Mg) and its alloys with calcium (Ca) and both Ca and zinc (Zn) have potential as bioresorbable bone implant materials provided the corrosion rate can be controlled. Thus, corrosion behaviour was investigated for pure Mg, Mg-2Ca, and Mg-2Ca-1Zn cast alloys subjected to either no heat treatment or to solutionizing and aging heat treatment. In addition, corrosion behaviour was investigated for surface modifications involving the deposition of silver (Ag) nanoparticles. These materials and constructs were all nominally biocompatible in that they would not elicit a strong and immediate adverse tissue reaction when implanted in bone. Static immersion tests in Hanks’ balanced salt solution were performed to evaluate the corrosion behaviour. The Mg-2Ca alloy exhibited the highest corrosion rate when compared with pure Mg and Mg-2Ca-1Zn for any length of immersion time. For short immersion times (48 hours), solutionizing followed by natural aging reduced the corrosion rate of Mg-2Ca alloy, but this heat treatment did not seem to have an effect on the corrosion rate of Mg-2Ca-1Zn alloy. As well, for short immersion times (48 hours), solutionizing and artificial aging also did not seem to have a large effect on corrosion rates for either Mg-2Ca or Mg-2Ca-1Zn, when compared to solutionizing and natural aging. Corrosion behaviour of surface-modified samples was sensitive to certain features of the Ag depositions. It was found that when the deposited Ag tracks were thick and wide, the corrosion rate of Ag-deposited samples increased significantly when compared to samples without any Ag deposition. However, when the Ag tracks were thinner and somewhat narrower, the corrosion rate did not appear to be much higher than that of samples without Ag deposition. Therefore, controlled Ag deposition may not be too detrimental to the corrosion behaviour of Mg and Mg alloys. The corrosion product morphology appeared to be similar for both the samples deposited with Ag and samples without any Ag. Needle-like formations were observed in small areas on the corroded surfaces. X-ray diffraction revealed Mg(OH)₂ as the main corrosion product. Because energy dispersive X-ray analysis consistently revealed multiple elements in the corrosion products (such as Mg, O, Ca, P, small amounts of C, and sometimes Cl), it was concluded that other compounds (possibly hydroxyapatite, magnesium chloride, and/or magnesium- and calcium-containing phosphates) may have formed in addition to the Mg(OH)₂.