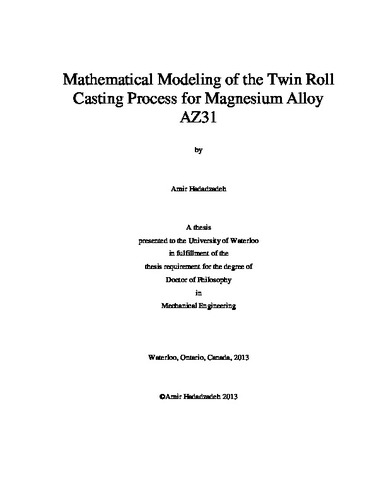 Although Twin Roll Casting (TRC) process has been used for almost 60 years in the aluminum industry, TRC of magnesium is relatively new. In TRC, molten metal is fed onto water-cooled rolls, where it solidifies and is then rolled. Solidification of the molten metal starts at the point of first metal-roll contact and is completed before the kissing point (point of least roll separation) of the two rolls. The unique thermo-physical properties inherent to magnesium and its alloys, such as lower specific heat and latent heat of fusion and larger freezing ranges (in comparison with aluminum and steel) make it challenging for TRC of this alloy. Therefore, a comprehensive understanding of the process and the interaction between the casting conditions and strip final quality is imperative to guarantee high quality twin roll cast strip production. A powerful tool to achieve such knowledge is to develop a mathematical model of the process. In this thesis, a 2D mathematical model for TRC of AZ31 magnesium alloy has been developed and validated based on the TRC facility located at the Natural Resources Canada Government Materials Laboratory (CanmetMATERIALS) in Hamilton, ON, Canada. The validation was performed by comparing the predicted exit strip temperature and secondary dendrite arm spacing (SDAS) through the strip thickness with those measured and obtained by experiments. The model was developed in two stages, first a thermal-fluid model was developed followed by validation and then a thermal-fluid-stress model was developed. This is the first time a comprehensive thermal-fluid-stress model has been developed to simulate the TRC process for magnesium alloys. The work has led to new knowledge about the TRC process and its effects on magnesium strip quality including the following: 1) Using ALSIM and ANSYS® CFX® commercial packages a 2D mathematical model of thermal-fluid-stress behavior of the magnesium sheet during TRC was successfully developed and validated. 2) An average value of 11 kW/m2°C for the Heat Transfer Coefficient (HTC) was found to best represent the heat transfer between the roll and the strip during TRC casting of AZ31 using the CanmetMATERIALS facility. 3) Modeling results showed that increasing casting speed, casting thicker strips and applying higher HTCs led to less uniform microstructure through thickness in terms of SDAS. 4) Simulations showed the importance of casting parameters such as casting speed and set-back distance on the thermal history and stress development in the sheet during TRC; higher casting speeds led to deeper sumps and higher exit temperatures as well as lower overall rolling loads and lower total strains experienced during TRC. 5) The effect of roll diameter on the thermal history and stress development in the strip was also studied and indicated how larger roll diameters increased the surface normal stress and rolling loads but had little effect on the mushy zone thickness. 6) The correlation between the mechanisms of center-line and inverse segregation formation and thermo-mechanical behavior of the strip was performed. The modeling results suggested that increasing the set-back distance decreases the risk of both defects. Moreover, increasing the roll diameter reduces the propensity to inverse segregation but has a minor effect for center-line segregation formation.