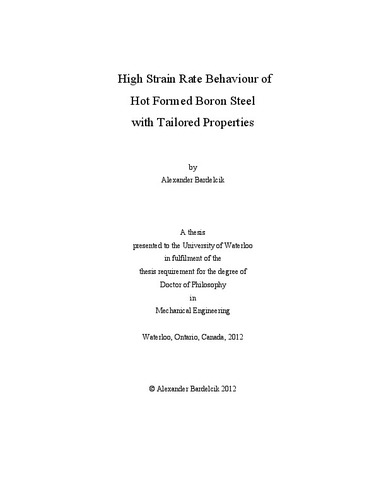 In an automotive crash event, hot stamped, die quenched martensitic structural components have been shown to provide excellent intrusion resistance. These alloys exhibit only limited ductility, however, which may limit the overall impact performance of the component. The introduction of lower strength and more ductile “tailored” properties within some regions of a hot stamped component has the potential to improve impact performance. One approach being applied to achieving such tailored properties is through locally controlling the cooling rate within the stamping die. The primary motivation for the current work is to understand the role of cooling rate on the as-quenched mechanical response of tailored hot stampings, which has required characterization of the high strain rate mechanical behaviour of tailored hot stamped boron steel. The effect of cooling rate and resulting microstructure on the as-quenched mechanical behavior of USIBOR® 1500P boron steel at strain rates between 10-3 and 103 s-1 was investigated. Specimens quenched at rates above the critical cooling rate (~27 °C/s) exhibited a fully martensitic microstructure with a UTS of ~1,450 MPa. Sub-critical cooling rates, in the range 14°C/s to 50 °C/s, resulted in as-quenched microstructures ranging between bainitic to martensitic, respectively. Tension tests revealed that predominantly bainitic material conditions (14 °C/s cooling rate) exhibited a lower UTS of 816 MPa compared to 1,447 MPa for the fully martensitic material condition (50 °C/s cooling rate) with a corresponding increase in elongation from 0.10 to 0.15 for the bainitic condition. The reduction in area was 70% for the bainitic material condition and 58% for the martensitic material conditions which implied that a tailored region consisting of bainite may be a desirable candidate for implementation within a hot stamped component. The strain rate sensitivity was shown to be moderate for all of the as-quenched material conditions and the measured flow stress curves were used to develop a strain rate sensitive constitutive model, the “Tailored Crash Model (TCM)”. The TCM accurately reproduced the measured flow stress curves as a function of effective plastic strain, strain rate and Vickers hardness (or area fraction of martensite and bainite). The effect of deformation during quenching and the associated shift in the CCT diagram on the subsequent constitutive response was also examined for this material. Specimens were simultaneously quenched and deformed at various cooling rates to achieve a range of as-quenched microstructures that included ferrite in addition to martensite and bainite. Tensile tests conducted on these specimens at strain rates ranging from 0.003 s-1 to ~80 s-1 revealed that the presence of ferrite resulted in an increase in uniform elongation and n-value which increased overall energy absorption for a given hardness level. The strain rate sensitivity was shown to be moderate for all of the as-quenched material conditions and the TCM constitutive model was extended to account for the presence of ferrite. This extended constitutive model, the “Tailored Crash Model II (TCM II)”, has been shown to predict flow stress as a function of effective plastic strain, strain rate and area fraction of martensite, bainite and ferrite. As a validation exercise, uniaxial tension test simulations of specimens extracted from the transition zone of a hot stamped lab-scale B-pillar with tailored properties [1] were performed. The measured hardness distribution along the gauge length of the tensile specimens was used as input for the TCM constitutive model to define the element constitutive response used in the finite element (FE) models. The measured stress versus strain response and strain distribution during loading (measured using digital image correlation) was in excellent agreement with the FE models and thus validated the TCM constitutive model developed in this work. Validation of the TCM II version of the model is left for future work.