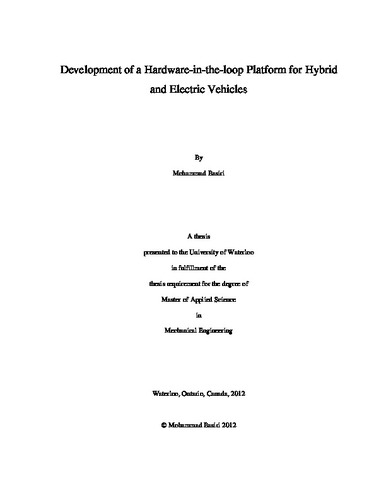 On a larger scope, improving the hybrid electric vehicles (HEVs) and electric vehicles (EVs) could address the public concern on climate changes and environmental issues. While ongoing research at the University of Waterloo targets improving HEVs and EVs through studying their various components, there was a pressing need to develop setups or tools to assist in the progress of this research. Hence, the primary problem at hand was the time-consuming and costly procedure of developing individual experimental setups/tools for the proposed experiments. The approach taken to solve these interconnected challenges was the design and development of a modular test bench capable of running various hardware-in-the-loop (HIL) studies on HEV powertrain components. The HIL approach was adopted in order to increase the accuracy of computer-generated simulations through the use of physical components in combination with software simulations. MATLAB Simulink software was employed to create the models and programs, which were then downloaded to dSPACE, a device employed to control the various components of the test bench. The scope of this project expanded not only to accommodate specific experimental setups, such as the HWFET drive cycle test, but also to consider modularity requirements that would address unforeseen circumstances and experimental needs. Meeting the modularity requirements would greatly reduce the cost and time needed for running the experiments. As a result of this project, a test bench was developed with four major components: a modular area (for attaching various physical components that comprise the proposed experiment’s setup), a control panel, a dSPACE, and the electrical energy supply and load. Through running various experiments, numerous components of the test bench were characterized. The developed test bench is capable of accommodating various experimental setups as well as producing relevant data for further analysis. The implications of this project are that the ongoing research on HEVs at the University of Waterloo can now employ the test bench to run proposed experiments more effectively in order to obtain more accurate data.