An Examination of Smoking-Related Behaviours and Self-Perceptions, and the Role of School Connectedness in Predicting Cigarette Use Among Students at an Ontario University 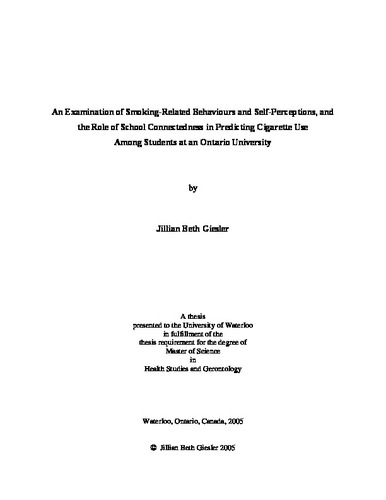 <strong>Background. </strong> Post-secondary institutions account for more smokers than any other occupational setting in Canada (Hammond, 2005). Unfortunately, little is known about tobacco use among this distinct population of students. The purpose of this study was to identify the prevalence of smoking and patterns of cigarette use among undergraduates at the University of Waterloo. The current study also sought to investigate the role of school connectedness in predicting students? smoking behaviours, and to explore the relation of student smoking status as determined by a behavoural measure and self-reported smoking status. <br /><br /> <strong>Methods. </strong> A secondary analysis of data collected using the University of Waterloo Tobacco Use Survey (2004) was employed for this research. Data were analyzed using descriptive statistics (frequencies, means, and percentages), non-parametric statistics (chi-square and Cohen?s kappa), principle components factor analysis and logistic regression in order to serve the exploratory purposes of the study. <br /><br /> <strong>Results. </strong> Overall, 17. 55% of the respondents reported current cigarette use (3. 37% daily; 14. 18% non-daily). Although most (85. 5%) students? self-perceptions remained as ?nonsmokers who never smoke? from university entrance to the study date, a greater proportion of students made a negative change in their self-perceived smoking status over this time period than a positive change (10. 13% vs. 4. 38%, respectively). Among students who perceived themselves as ?nonsmokers who never smoke? or ?ex-smokers? at university entrance, being more academically engaged predicted making a negative change in ones? self-perceived smoking status (OR= 1. 924, CI<sub>95</sub>= 1. 064-3. 480). Finally, the proportion of non-daily smokers differed between the two measures of smoking status. Many students classified as ?occasional smokers? using the behavioural measure actually perceived themselves as ?nonsmokers who smoke sometimes?. <br /><br /> <strong>Discussion. </strong> The results of this study provide valuable new insights into smoking among Canadian university students. Students who are more academically engaged may be at risk of initiating smoking, perhaps as a means of stress reduction. Furthermore, the adult measure of occasional smoking typically used in tobacco research may be insufficient to inform tobacco control efforts for this population as it results in different proportions of non-daily smokers when compared against students? self-perceived smoking status. The findings of this exploratory research await replication with larger samples and different measures. Implications of the results for practice and further research are discussed. <br /><br /> <strong>Conclusions. </strong> This strategy of assessing connectedness to school shows promise in predicting post-secondary students? cigarette smoking behaviours. The results also provide support for continued investigation into the best ways to measure and assess current cigarette use in this unique population.

Jillian Giesler (2005). An Examination of Smoking-Related Behaviours and Self-Perceptions, and the Role of School Connectedness in Predicting Cigarette Use Among Students at an Ontario University. UWSpace. http://hdl.handle.net/10012/722