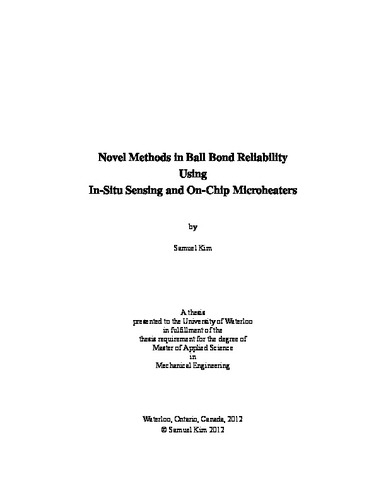 Wire bonding is the process of creating interconnects between the circuitry on a microchip and PCB boards or substrates so that the microchip can interact with the outside world. The materials and techniques used in this bonding process can cause a wide variation in bond quality, so wire bond reliability testing is very important in determining the quality and longevity of wire bonds. Due to the fact that microchips are encased in protective resins after bonding and their substrates attached to the larger device as a whole, once any single wire bond fails then it could jeapordize the entire device as the wire bonds cannot be individually replaced or fixed. Current methods of reliability testing are lengthy and often destroy the entire sample in the process of evaluation, so the availability of novel non-destructive, real-time monitoring methods as well as accelerated aging could reduce costs and provide realistically timed tests of novel wire bond materials which do not form Intermetallic compounds (IMCs) as rapidly as Au wire on Al substrates. In this thesis, five new chip designs for use in wire bond reliability testing are reported, focusing on the first joint made in a wire bond, called the ball bond. These chips are scaled either to test up to 55 test bonds simultaneously or just one at a time, introducing different requirements for microchip infrastructure capabilities, such as on-chip sensing/data bus, multiplexer, and switches able to operate under High Temperature Storage (HTS) which ranges from temperatures of 150-220 ºC. There are different heating requirements for each of these microchips, needing to be heated externally or containing on-chip microheaters to heat only the ball bond under test, and not the rest of the microchip or surrounding I/O pads. Of the five chip designs, sample chips were produced by an external company. Experimental studies were then carried out with two of these chip designs. They were specifically made to test novel methods of determining ball bond reliability using in-situ, non-destructive sensing, in real-time, while the ball bond undergoes thermal aging. Pad resistance as an analysis tool for ball bond reliability is proposed in this thesis as a new way of evaluating ball bond quality and allows for the testing of electrical connection without the need for specialized measurement probes or difficult bonding processes that contact resistance measurements require. Results are reported for pad resistance measurements of a ball bond under very high temperature storage (VHTS) at 250 ºC, a temperature exceeding typical HTS ranges to accelerate aging. Pad resistance measurements are taken using the four-wire measurement method from each corner of the bond pad, while reversing current direction every measurement to remove thermo-electric effects, and then calculating the average square resistance of the pad from this value. The test ball bond is aged using a novel on-chip microheater which is a N+ doped Si resistive heater located directly underneath the bond pad, and can achieve temperatures up to 300 ºC while not aging any of the I/O pads surrounding it, which are located ~180 µm away. A 50 Ω resistor is placed 60 µm away from the heater to monitor the temperature. The use of a microheater allows the aging of novel wire types at temperatures much higher than those permitted for microchip operation while thermally isolating the test bond from the sensing and power bonds, which do not need to be aged. Higher temperatures allow the aging process to be sped up considerably. The microheater is programmatically cycled between 250 ºC (for 45 min) and 25 ºC (for 15 min) for up to 200 h or until the pad resistance measurements fail due breakdown of the bonding pad. Intermetallic compounds forming between the ball bond and the pad first become visible after a few hours, and then the pad becomes almost completely consumed after a day. The pad resistance is measured every few seconds while the sample is at room temperature, and the increase in pad resistance agrees with the fact that Au/Al IMC products are known to have much higher resistance than both pure Au or Al. Also discussed are some aging results of Au wires and Pd coated Cu (PCC) wires bonded to Al bonding pads and aged at a temperature of 200 ºC in an oven for 670 h. The oven aged Au ball bonds also saw IMC formation on the surface of the bonding pad, much like the microheater tests. The PCC ball bonds became heavily oxidized due to lack of Pd on the surface of the ball, the wire portions did not oxidize much. In conclusion, the new structures have been demonstrated to age ball bonds faster than with conventional methods while obtaining non-destructive data. Specifically, the new microheater ages a test bond at an accelerated rate without having an observable effect on the I/O connections used to monitor the test bond. Pad resistance measurements correlate to the aging of the test bond and ensure the electrical integrity of the joint is checked.