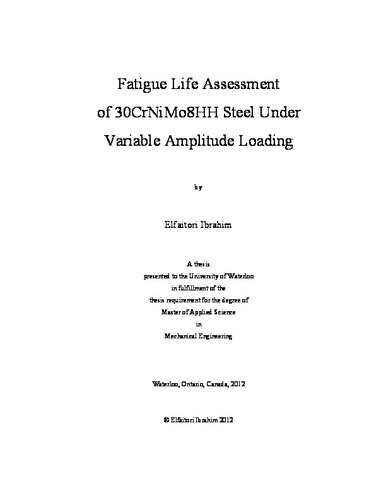 The actual service loading histories of most engineering components are characterized by variable amplitudes and are sometimes rather complicated. The goal of this study was to estimate the fatigue life of nickel-chromium-molybdenum 30CrNiMo8HH steel alloy under axial and pure torsion variable amplitude loading (VAL) conditions. The investigation was directed at two primary factors that are believed to have an influence on fatigue life under such loading conditions: load sequence and mean stress. The experimental work for this research included two-step loading, non-zero mean strain loading, and VAL tests, the results of which were added to previously determined fully reversed strain-controlled fatigue data. The effect of load sequence on fatigue life was examined through the application of the commonly used linear damage accumulation rule along with the Manson and Marco–Starkey damage accumulation methods, the latter of which takes load sequence into account. Based on the two-step experimental results, both the Manson and Marco–Starkey methods were modified in order to eliminate the empirically determined constants normally required for these two methods. The effect of mean stress on fatigue life was investigated with the use of three life prediction models: Smith–Watson–Topper (SWT), Fatemi–Socie (FS), and Jahed–Varvani (JV). The cycles from the VAL histories were counted using a rainflow counting procedure that maintains the applied strain sequence, and a novel method was developed for the estimation of the total energy density required for the JV model. For two-step loading and for all three fatigue models employed, the modified damage accumulation methods provided superior fatigue life predictions. However, regardless of the damage accumulation method applied, the most satisfactory fatigue life correlation for VAL was obtained using the energy-based JV model.