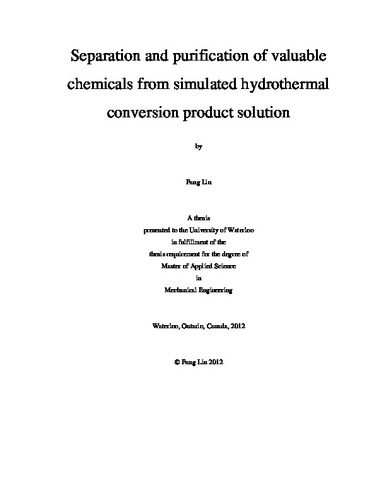 5-HMF as a versatile organic compound is considered as a promising biomass-derived value-added product via dehydration of saccharide. A large amount of research has been carried out on its production and separation. In this research, three single and three mixed solvents were tested to separate 5-HMF via liquid-liquid extraction from simulated HTC products. The mixed solvents were made up of DCM-THF, DCM-2-butanol and 2-butanol-THF with different mixing ratio of 1:4, 1:1, and 4:1. 20wt% and 10wt% NaCl were added in to help phase separation and to improve the performance of extraction. The simulated HTC product was composed of 5-HMF, levulinic acid and furfural. The extraction was carried out in vial and the phase separation was accomplished in a separatory funnel. The aqueous phase was analyzed with HPLC-UV to determine the solute concentrations in the aqueous phase. The solute concentrations in organic phase, partition coefficients, separation factors, solute recovery rates and purities of 5-HMF in separated products were calculated accordingly. The separation performance of mixed solvents was compared with theoretical values. In addition, the effects of pH and NaCl concentration on extraction and separation were investigated. It was found that the partition coefficients of 5-HMF were always higher than those of levulinic acid. 20 wt% of NaCl improved 5-HMF extraction significantly, and the corresponding partition coefficient was 6.87. Extraction of levulinic acid was found more sensitive to solvent pH value than 5-HMF and furfural. For 5-HMF extraction, pH 2.4 was more favorable than pH 2.0. Meanwhile, mixed solvents had better extraction performance than each single solvent for 5-HMF. The performance of the mixed solvents depended on mixing ratio; partition coefficient showed linear correlation with mixing fraction. More furfural was extracted into organic phase than 5-HMF, and the partition coefficients of levulinic acid were very close to that of 5-HMF. In general, however, mixed solvent extraction was able to improve the extraction efficiency rather than separation efficiency of 5-HMF.