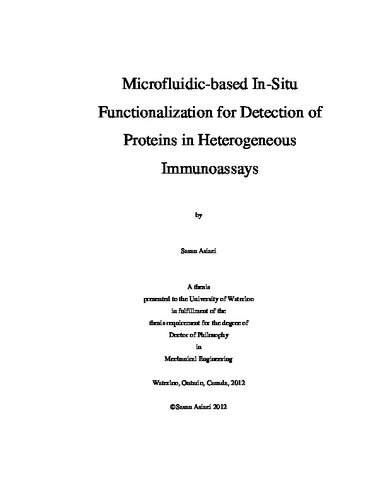 One the most daunting technical challenges in the realization of biosensors is functionalizing transducing surfaces for the detection of biomolecules. Functionalization is defined as the formation of a bio-compatible interface on the transducing surfaces of bio-chemical sensors for immobilizing and subsequent sensing of biomolecules. The kinetics of functionalization reactions is a particularly important issue, since conventional functionalization protocols are associated with lengthy process times, from hours to days. The objective of this thesis is the improvement of the functionalization protocols and their kinetics for biosensing applications. This objective is realized via modeling and experimental verification of novel functionalization techniques in microfluidic environments. The improved functionalization protocols using microfluidic environments enable in-situ functionalization, which reduces the processing times and the amount of reagents consumed, compared to conventional methods. The functionalization is performed using self-assembled monolayers (SAMs) of thiols. The thiols are organic compounds with a sulphur group that assists in the chemisorption of the thiol to the surface of metals like gold. The two reactions in the functionalization process examined in this thesis are the SAM formation and the SAM/probe molecule conjugation. SAM/probe molecule conjugation is the chemical treatment of the SAM followed by the binding of the probe molecule to the SAM. In general, the probe molecule is selective in binding with a given biomolecule, called the target molecule. Within this thesis, the probe molecule is an antibody and the target molecule is an antigen. The kinetics of the reaction between the probe (antibody) and the target biomolecule (antigen) is also studied. The reaction between an antigen and its antibody is called the immunoreaction. The biosensing technique that utilizes the immunoreaction is immunoassay. A numerical model is constructed using the finite element method (FEM), and is used to study the kinetics of the functionalization reactions. The aim of the kinetic studies is to achieve both minimal process times and reagents consumption. The impact of several important parameters on the kinetics of the reactions is investigated, and the trends observed are explained using kinetic descriptive dimensionless numbers, such as the Damköhler number and the Peclet number. Careful numerical modeling of the reactions contributes to a number of findings. A considerably faster than conventional SAM formation protocol is predicted. This fast-SAM protocol is capable of reducing the process times from the conventional 24-hours to 15 minutes. The numerical simulations also predict that conventional conjugation protocols result in the overexposure of the SAM and the probe molecule to the conjugation reagents. This overexposure consequently lowers conjugation efficiencies. The immunoreaction kinetics of a 70 kilo-Dalton heat shock protein (HSP70) with its antibody in a hypothetical microchannel is also investigated through the FEM simulations. Optimal reaction conditions are determined, including the flow velocity and the surface concentration of the immobilized probes (antibodies). Based on the numerical results and a series of experimental studies, the fast-SAM protocol application is successfully confirmed. Moreover, the optimum reagent concentration for a given one- hour conjugation process time is determined. This functionalization protocol is successfully applied to immobilize the HSP70 antibody on gold surfaces. The use of the fast-SAM protocol and the predicted optimum conjugation conditions result in binding of the HSP70 antibody on gold, with the same or superior immobilization quality, compared to the conventional protocols. Upon implementation of a 70 μm.s^(-1) flow velocity, the reaction is observed to complete in around 30-35 minutes, which is close to the numerically predicted 30 minutes and 16 seconds. This immunoreaction time is considerably less than conventional 4-12 hour processes. The modified in-situ functionalization techniques achieved here are promising for substantially reducing the preparation times and improving the performance of biosensors, in general, and immunoassays, in particular.