Cervical cancer screening among immigrant women in Ontario: The influence of acculturation 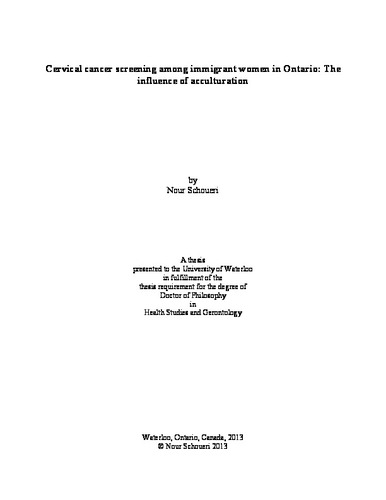 Background: Cervical cancer is the second most common cancer among women worldwide and its incidence is higher for certain ethnic groups in Canada, compared to White Canadians. As more women immigrate to Canada, the potential for prevention increases. Failure to prevent cervical cancer is partly due to non-participation in regular screening. The objectives of the research were to (1) explore whether there are cervical cancer screening differences between non-immigrant and immigrant women; (2) explore cervical cancer screening decision-making among immigrant women; and (3) explore the influence of acculturation on cervical cancer screening. Methods: This research consisted of two studies. The first study consisted of quantitative analysis of the 2007-2008 Canadian Community Health Survey (CCHS). Univariate analyses, cross-tabulations, and logistic regression modeling were conducted. Analyses were restricted to women aged 18-69 years old living in Ontario with no history of hysterectomy. Sample weights were applied and bootstrapping was performed. Analyses were conducted on the full Ontario sample (unweighted n=13,549) and the immigrant sample (unweighted n=2,904), the latter of which was stratified into two groups based on self-reported cultural/racial background: immigrant women more likely to report a time-appropriate Pap test (low risk) and those less likely to report a time-appropriate Pap test (high risk). The second study consisted of interviews conducted with 22 older (aged 50-69 years) South Asian immigrant women from Waterloo and Toronto, Ontario. The descriptive qualitative study was informed by grounded theory methodology. Interviews were audio-recorded and transcribed. Results: The first study identified that almost 17% of women reported not having a time-appropriate Pap test. Immigrant women were more likely to report not having a time-appropriate Pap test (21.73%) compared to non-immigrants (14.22%). Among immigrant women, almost 17% of White, Black, and other women (low-risk group) did not report a recent Pap test, compared to 28.67% of Chinese, South Asian, and other Asian women (high-risk group). Among the full Ontario sample, not having a time-appropriate Pap test was associated with being 50-69 years old, single, having low education and income, not having a regular doctor, being of Asian (Chinese, South Asian, other Asian) cultural/racial background, perceiving having less than excellent health, and being a recent immigrant. Among women in the low-risk group, not having a recent Pap test was associated with older age, lower household income, not having a regular doctor, and a lower proportion of life spent in Canada. Among women in the high-risk group, not having a time-appropriate Pap test was associated with lower education and not having a regular doctor. Within the second study, various themes emerged exploring cervical cancer screening decision-making among the sample. Six major categories emerged: (1) the influence of others, (2) health beliefs and knowledge, (3) responsibility over health, (4) experiences in healthcare, (5) components of culture, and (6) the process of acculturation. The influence of doctors on cervical cancer screening decision-making emerged as a strong theme within interviews. Conclusion: Results provide insight into the inequities that still exist in terms of who is participating in cervical cancer screening, as well as the factors involved in screening decision-making and the relationships between them. This research provides an updated overview of Pap test participation in Ontario, as well as advancing our understanding of the influence of factors on screening decision-making among immigrant women. Through this research, it becomes clear that targeted efforts must be directed towards those less likely to get a Pap test.