Agricultural GMOs in India: Dimensions of influence in the politics and policy of Bt cotton and Bt brinjal 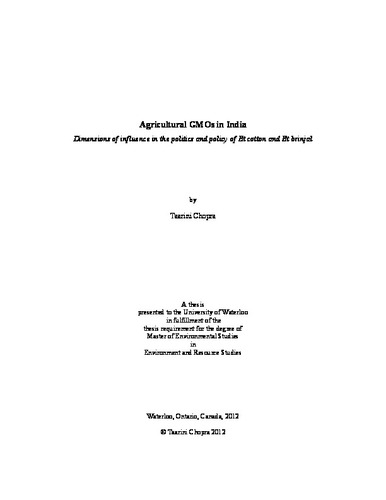 This thesis looks at the divergent policy decisions on the commercial release of two genetically modified (GM) crops in India. Bt cotton was introduced in India in 2002, and has spread widely across the country, though not without controversy. In 2010, the first GM food crop – Bt Brinjal (eggplant) – was put forward for approval. In contrast to the Bt cotton decision, and following heated debate and a series of public consultations across the country, an indefinite moratorium was placed on the crop. In this thesis, I unpack the various factors that shaped both decisions and the politics that accompanied them. To facilitate this analysis, I use a conceptual framework that combines four key forces that are often the focus of food governance analysis, but which are not always considered together. I argue that the divergence in outcomes can be explained by a confluence of shifts in key elements of the policy process. These dimensions of influence can be understood in four related categories: corporate actors, institutional mechanisms, science and science networks, and discursive elements. Changes that took place in each of these dimensions in the period between the two decisions align to explain divergent outcomes that no individual influence could. The conceptual framework I develop in this thesis presents a useful structure to analyse the often-complex and multi-causal processes and outcomes related to food and environmental issues. The results of this research have implications for the future direction of agricultural GMO policy in India, as well as in other countries in the global South.

Taarini Chopra (2013). Agricultural GMOs in India: Dimensions of influence in the politics and policy of Bt cotton and Bt brinjal. UWSpace. http://hdl.handle.net/10012/7206